Famous As:- Indian Freedom Fighter who Employed Non-violent Resistance & Known as 'Father of the Nation' 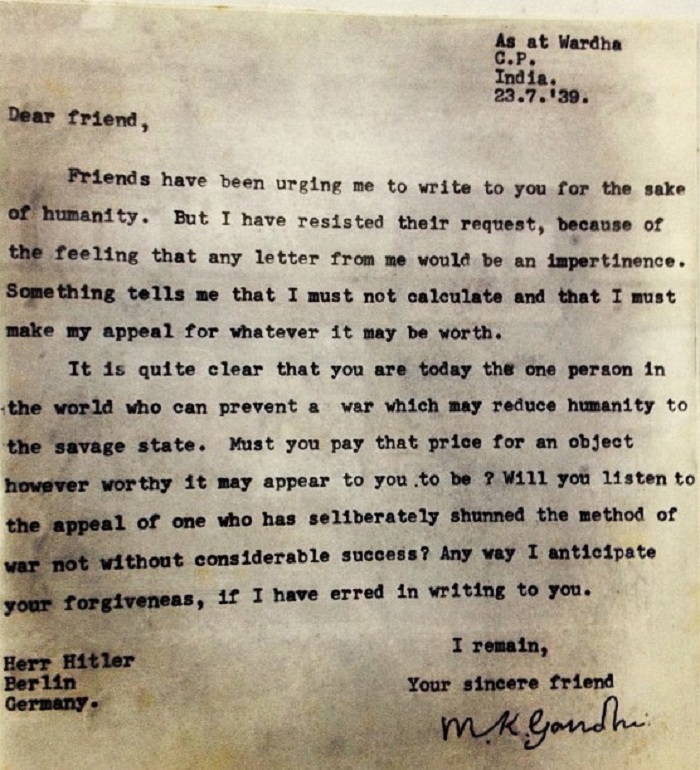 By 1930, Mahatma Gandhi had become a political figure of great significance and he was held in high regard even by the Western World. He was able to motivate the masses to unite against the British Raj, all the while using non-violence and non-cooperation as his weapons.

The famous Dandi March, where Gandhi spearheaded the 241-mile walk from Sabarmati to the coastal settlement of Dandi, garnered much international attention. The movement organised in protest against the unjust monopoly of the British over salt was considered a landmark in the history of Indian freedom struggle.

With the resounding success of Salt March, Gandhi’s stature as a proponent of non-violence was well established. This led to many of his aides urging him to pen a letter to the dictator Adolph Hitler, whose ambitions were paving way for another world war.

The Fuhrer, oblivious to all negotiations including the Treaty of Versailles, gave a nod to the initiative of assimilating a German air force in 1935 and the following year he ordered his forces to march into Rhineland. He also negotiated terms with the nations of Italy and Japan in 1936 and two years later the Nazis began the occupation of Austria.

Such was the nature of atrocities carried out by the Gestapo that the Time magazine named Adolf Hitler as the Man of the Year and stated that “Lesser men of the year seemed small indeed beside the Fuhrer.” Laced with sarcasm the magazine editors intended to shed light over the heinous and inhumane conduct followed in the Fuhrer’s regime. They spoke about how “Germany’s 700,000 Jews have been tortured physically, robbed of homes and properties, denied a chance to earn a living, chased off the streets. Now they are being held for ‘ransom,’ a gangster trick through the ages.” In the end they stated the thought which seemed to be at the back of everyone’s mind, “To those who watched the closing events of the year it seemed more than probable that the Man of 1938 may make 1939 a year to be remembered.”

Britain and France were under the illusion that their pact with Hitler, which gave him the authority over a fraction of Czechoslovakia would keep him at bay. By 1939 the Germans had overtaken the entire nation of Czechoslovakia. It sowed the final seeds of World War II, as Britain decided to side with Poland in the likely event that Germany waged a war against the latter.

At this juncture, Gandhi sensed the inevitable and decided to make an effort to abate the war and on July 23, 1939 put his thoughts to words in a typewritten letter to Hitler. The following is an excerpt from the letter:

Friends have been urging me to write to you for the sake of humanity. But I have resisted their request, because of the feeling that any letter from me would be an impertinence. Something tells me that I must not calculate and that I must make my appeal for whatever it may be worth.

It is quite clear that you are today the one person in the world who can prevent a war which may reduce humanity to the savage state. Must you pay the price for an object however worthy it may appear to you to be? Will you listen to the appeal of one who has deliberately shunned the method of war not without considerable success? Any way I anticipate your forgiveness, if I have erred in writing to you.

The letter however did not reach its intended recipient, as the British Government intercepted it.

As anticipated, the German forces raided Poland on September 3, 1939 thus marking the beginning of WWII. The British and French joined forces against the Germans, and USSR was a mute spectator in the war until 1941, on account of the pact signed between the Soviet and the Germans.

The Germans seemed to face no difficulty in defeating the allied powers and by May 1940 they had control over Belgium, Denmark, France, Luxembourg, Netherlands and Norway. In July the same year, Nazis brought the war home for the British forces. An estimated of 30,000 bombings occurred in London killing tens of thousands.

Appalled by the destruction of life and property, Gandhi once again decided to write to Hitler. In the letter he had addressed the dictator as ‘Dear Friend’, as he had on the previous occasion. It read: “That I address you as a friend is no formality. I own no foes. My business in life has been for the past 33 years to enlist the friendship of the whole of humanity by befriending mankind, irrespective of race, colour or creed.”

This time however Gandhi rebuked the actions of the Fuhrer:

Your own writings and pronouncements . . . leave no room for doubt that many of your acts are monstrous and unbecoming of human dignity. . . . Such are your humiliation of Czechoslovakia, the rape of Poland and the swallowing of Denmark.

He was also critical of the destruction wrecked upon by the Gestapo:

It is a marvel to me that you do not see that it is nobody’s monopoly. If not the British, some other power will certainly improve upon your method and beat you with your own weapon. You are leaving no legacy to your people of which they would feel proud. They cannot take pride in a recital of cruel deed, however skilfully planned. I, therefore, appeal to you in the name of humanity to stop the war.

He insisted that even though both India and Germany despised the British, violence was not a solution:

We know what the British heel means for us and the non-European races of the world. But we would never wish to end the British rule with German aid. We have found in non-violence a force, which, if organized, can without doubt match itself against a combination of all the most violent forces of the world.

The letter ended with Gandhi appealing to the Fuhrer to forbid his violent ways:

During this season when the hearts of the peoples of Europe yearn for peace . . . is it too much to ask you to make and effort for peace?

The fate of this letter is however not known but who knows how it would have impacted the course of history if the Fuhrer had agreed to Gandhi’s plea.