Sky Katz is a popular American rapper and actor, who first came under the spotlight with her mesmerizing performances on the reality show ‘America’s Got Talent.’ Over the years, Sky has turned into a seasoned entertainer. She has proved herself as a talented singer through singles such as ‘Fall Back’ and has also showcased her acting skills through the popular sitcom ‘Raven’s Home,’ a spin-off of ‘That’s So Raven.’ She believes she can identify with her character in the sitcom, ‘Tess O’Malley.’ She often uses social media to promote her work and to keep in touch with her fans. Though just a young kid on the block, Sky is sure to make it big in the entertainment industry in the years to come.

Sky Katz was born on December 12, 2004, in Melville, Long Island, New York, United States. She has three elder siblings. Her original name is Skylar Katz, while her nickname is “Pookie.” She started playing basketball competitively when she was just 10 years old and has played with three different teams. 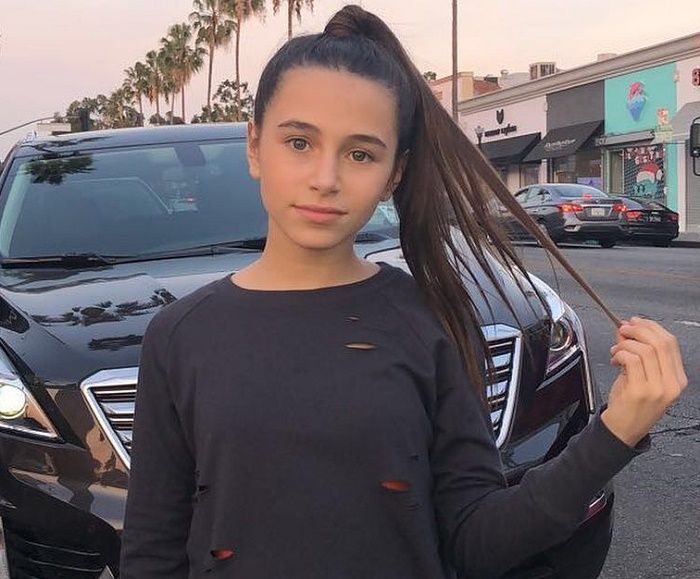 From Skylar to Sky Katz: Fame through Music and TV

Sky was just 5 when she began rapping. She became a household name after appearing in the 11th season of the reality show ‘America’s Got Talent,’ in 2016, where she performed an original rap song named ‘Fresh.’ The song won her a “Yes” to go to the next round. This was also her first TV appearance. She was just 11 years old back then. She also performed the song ‘Haters’ on the show. However, she was eliminated later, in the ‘Judge Cuts 2’ round.

In 2017, she came up with her first original single, ‘For Da Summer,’ under the label ‘Hood Famous Music.’ In June the following year, she released her second single, ‘Fall Back,’ under the label ‘Sky’s The Limit 23 Records.’ She donned the director’s hat for the first time and went behind the camera to make the music video of this track.

She also began appearing alongside Raven-Symoné on the hit ‘Disney’ show ‘Raven’s Home,’ in 2017. The show is a spin-off of the immensely popular sitcom ‘That’s So Raven.’ Her character on the show, ‘Tess O’Malley,’ is also a rapper. Sky believes her character is quite similar to her, as ‘Tess’ cares about her friends as much as Sky does. Similarly, ‘Tess’ is always found in other people’s homes, just as Sky loves to have people in her house.

Some of the other shows she has been part of are ‘The Harry Connick Jr. Show,’ the ‘New York Knicks Halftime Show’ at ‘Madison Square Garden,’ the ‘Winter Film Awards,’ the ‘SXSW,’ the ‘New York Fashion Week’s Rookie USA Fashion Show,’ and ‘McDonald’s Houston Children’s Festival.’ She has also appeared in the shorts ‘Legendary’ and ‘DuckTales Theme Song’ for ‘Disney Channel Stars.’

She has released original music such as ‘Like This,’ featuring Lil Tjay. She also contributed to the track ‘Party with Me’ for the ‘Disney Channel’ live action movie ‘Kim Possible’ (2019).

Skylar has contributed to several soundtracks, too, such as ‘Eye to Eye,’ ‘Face of a Movement,’ ‘Replay the Moment,’ and ‘Tess Freestyles,’ on the TV show ‘Raven’s Home’ in 2018.

Sky Katz has been part of the ‘American Society of Composers, Authors and Publishers’ (ASCAP). She collaborated with heavy metal band ‘Unlocking the Truth’ for the single ‘Rockstar,’ in 2017. On Kid’s Day, the same year, she performed live at the ‘Arthur Ashe Stadium.’ She is devoted to philanthropic work and serves as the national ambassador for the ‘Sunrise Association.’

On February 24, 2016, she launched her self-titled ‘YouTube’ channel. The first video on her channel was a cover of Nicki Minaj’s track ‘Monster.’ The channel has so far gained her more than 16 million views and over 300 thousand subscribers.

She joined ‘Twitter’ in February 2016 and currently has over 13 thousand followers and more than a thousand likes on the platform. She is also present on ‘Instagram,’ where her posts have helped her earn over a million followers.

Sky is the youngest of the four children of her parents, Dr. Mike Katz and Fran Katz. Mike is a pediatrician, while Fran is a homemaker. She grew up with two sisters, Hailey and Madison, and a brother, Dylan.

She once said that her parents grew up in Queens and thus loved hip-hop, which made them introduce her to hip-hop at an early age. In fact, her parents were big fans of Tupac and Biggie.

Initially, Sky wanted to become a doctor like her father but later developed an interest in rapping and acting.

Not much is known about her love life or relationships, and it is assumed that she is single. However, many of her fans have speculated that she is probably dating her ‘Raven’s Home’ co-star Isaac Ryan Brown.

Pink is her favorite color, while English is her favorite subject in school. She has her own website, skykatzraps.com, and has endorsed brands such as ‘Nintendo’ and ‘Nike.’

Skylar’s love for basketball makes her fit and healthy. She does not have a strict diet plan and enjoys a lot of sugary food. She often plays basketball with her brother and wins. She can juggle, shoot hoops, and skateboard. In April 2018, she participated in ‘Nike’s ‘Go LA 10K’ race.

Her favorite rappers are Nicki Minaj and Logic, and she is also fond of Drake, Nas, and Rakim. She loves the song ‘Sorry Not Sorry’ by Demi Lovato.

She enjoys birthday-cake flavored ice-creams. She also loves having marshmallows after melting them in the microwave. She hates tomatoes, but she enjoys eating pizza with ricotta cheese topping. She loves ‘Gushers’ and ‘Kit Kat.’ She loves gorging on lobsters and steaks.

Sky has two dogs named Jose and Annie. She often refers to them as “my noodles.” She loves quad biking with her family. She is very scared of being eaten by sharks. She pronounces the word “water” as “wodr.”

Sky would love to travel to China someday. She once claimed she is addicted to ‘Instagram.’ Her favorite emoji is the “laughing hard” emoji. She cannot do without highlighters in her makeup kit.

Her favorite ‘Disney’ movie is ‘High School Musical’ (2006). Steph Curry is her favorite basketball player, while Taylor Lautner is her celebrity crush. She is fond of watching the TV show ‘The Fosters’ and would love to appear on the show ‘K.C. Undercover’ someday. Actor and singer Zendaya has been a big inspiration to her.