Sophie Fergi, also popular as the Goth Girl, is an American child actress and YouTube star. She rose to fame playing the Goth Girl in the comedy web series ‘Mani,’ produced by Brat TV. She also starred in the comedy series ‘Creepy Toys Girls’ and in the reality TV series ‘Piperazzi,’ and featured in the short comedy ‘God’s Gracie’ and in the talk show TV series ‘TinaQ’s Celebrity Interviews.’ Sophie ventured into social media with YouTube and Instagram to share her inside story and fun filled and crazy moments with her fans. In no time, she got huge number of followers, becoming one of the new online sensations.

Sophie Fergi commenced her acting journey at just three years of age, appearing in a bit role of a restaurant guest in the short romantic film ‘Away We Stay.’ As a result of this experience, Sophie developed a passion for acting. She also started showcasing her creative bent of mind writing and illustrating her own stories even before the age of ten. 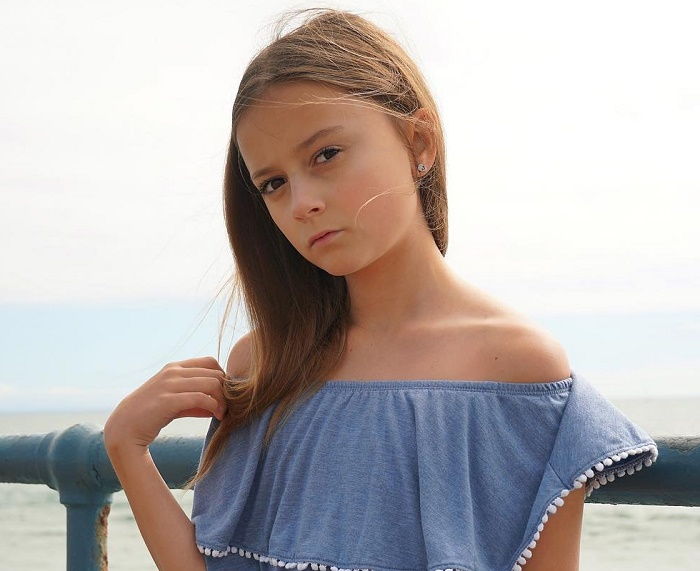 According to sources, one of her mother’s friends encouraged Sophie to take up work as a background actor and look for a substantial role while working in showbiz. Sophie followed suit and eventually landed up as a background extra in the first season of the comedy web series ‘Mani,’ starring Piper Rockelle, Lawrence Wayne Curry, and Hayley LeBlanc. Sophie’s role of ‘the Goth Girl’ appeared for the first time in the series in the November 29, 2017-aired episode, ‘Cat Fight.’ Eventually, Sophie started drawing attention and got her real breakthrough when she was included in the main cast of the series in its second season. Since then she has regularly featured in the series. It is scheduled to premiere its fifth season in February 2020. The series raised her fame to new heights and paved her way for other projects.

Thereafter she appeared in the reality television series ‘Piperazzi’ named after her ‘Mani’ co-star, good friend and YouTube star Piper Rockelle. The series features trials and tribulations of Piper’s Hollywood adventures. Sophie has so far appeared in two episodes of the series namely ‘Piper Rockelle Has Landed’ and ‘A Voodoo Situation.’ Sophie Fergi aspires to become a noted Hollywood actress one day and is presently focussed on honing her skills.

After making impact as ‘the Goth Girl’ in ‘Mani’ and other notable roles, Sophie decided to give her fans a sneak peek into her life through social media. She launched her self-titled YouTube channel on October 9, 2018. The first video of her channel, where she documents her daily life, was ‘Halloween Horror Nights at Universal Hollywood ft. Stranger Things Maze | Sophie Fergi’. It was posted on October 18, 2018. She mentions that she makes funny videos on the channel along with her best friends crush and Piper Rockelle and that her fans can get to see her life in a totally different perspective. The videos and vlogs on her channel, including the ones featuring funny reactions, comedy, pranks, crazy challenges, crush, make up diys, last to challenges, fashion hauls and boyfriend videos hve already become quite popular, getting her channel millions of views and hundreds of thousands of subscribers. One of the most popular videos of the channel is ‘My Crush REACTS to my FASHION NOVA Outfits **FUNNY CHALLENGE**’; while ‘SPYING On My CRUSH for 24 HOURS Challenge in PUBLIC *GONE WRONG*’ and ‘Traveled 1,000 MILES to SURPRISE My Best Friend Piper Rockelle *EMOTIONAL*(w/ Gavin Magnus)’ are two of Sophie’s personal favourites.

Sophie has also made it big on Instagram with over a million followers on her account, ‘sophiefergi.’ She posts selfies and everyday life pictures of herself, family, friends, and other internet personalities. Several of her pictures feature her with her friends and actors Gavin Magnus and Piper Rockelle. She also collaborates with different fashion brands, wearing their trendy and cool outfits.

Sophie Fergi was born on July 4, 2007, in Los Angeles, California, US. She was raised mostly by her mother, Heather Nichole, who along with Sophie’s uncle Adam Trimmer has supported her wholeheartedly in all her endeavours. The two feature in many of Sophie’s posts on different social media handles. Her mother also works as her general manager and runs, manages, and monitors all her social media accounts. Sophie presently lives in Hollywood. She enjoys watching movies, playing games, and dressing up during her spare time.