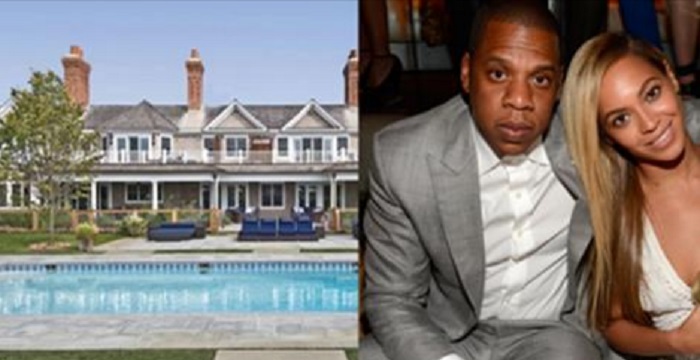 It’s no sin that most of we working class heroes used to tune into ‘MTV Cribs’ and marvel with envy at the houses possessed by the ultra-rich celebrities. After all, most of us dream of owning pads like theirs sometime in our lifetime, but the sad truth is I doubt that will ever happen. At least attaining residences as good as the ones listed below, is but an unachievable goal. We might struggle and toil for the rest of our lives, but there is hardly a chance that we buy a modest accommodation for ourselves given the rising real estate prices these days. While most celebrity houses are posh and leave us awestricken with its opulence at first glance, most of them don’t even come close to the ten most expensive mansions that we have listed here. Take a look at them, and indulge in jealousy as you scroll through this elite list.

Known popularly as “A –Rod”, Rodrigues is regarded as one of the best baseball players that have ever graced the game. With a lucrative career spanning over 20-years, Alex has won three American Leagues and a record of 25-grand-slams. He amassed a total of 687 home runs, a batting average of .279 and over 3000-runs over his two decade long career. With a net worth easily surpassing $300 million, it’s no surprise that Rodrigues makes it to this list with his opulent $24-million mansion. Rod’s pad is spread over 20,000 square feet and has two boat docks in his backyard. Pretty sure he’s whacking a few homeruns in his house itself. 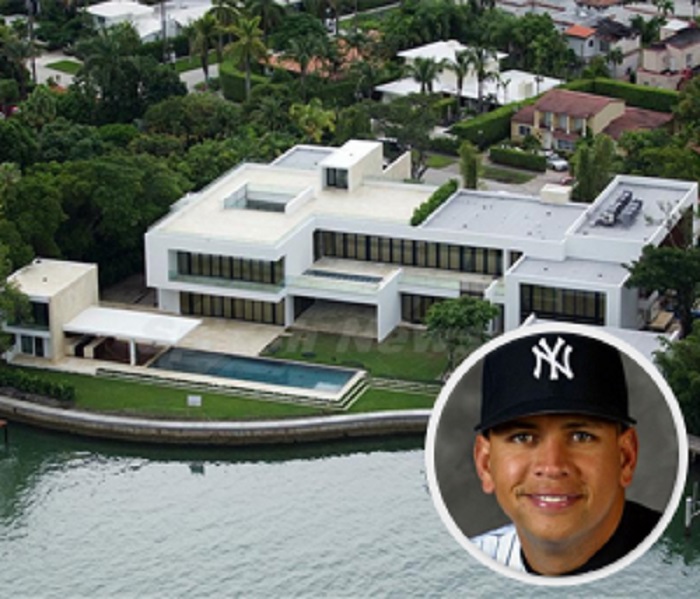 The founder of Guess Jeans in 1978, Marciano’s business took a flying start back then and inevitably changed fashion for what it is today. Despite his company piling in the big bucks even then, Georges was jaded with the fashion industry and quit the company after distributing his shares to his siblings. Invigorated after more than two decades, he returned with a high-end clothing line in 2015. With a net worth of $170 million, Marciano purchased this Beverly Hills mansion for $2 million but renovated it to a point that the value of the property now stands at $24.5 million. The mansions boasts of a private theatre, two guest houses, a swimming pool, tennis court and much more. 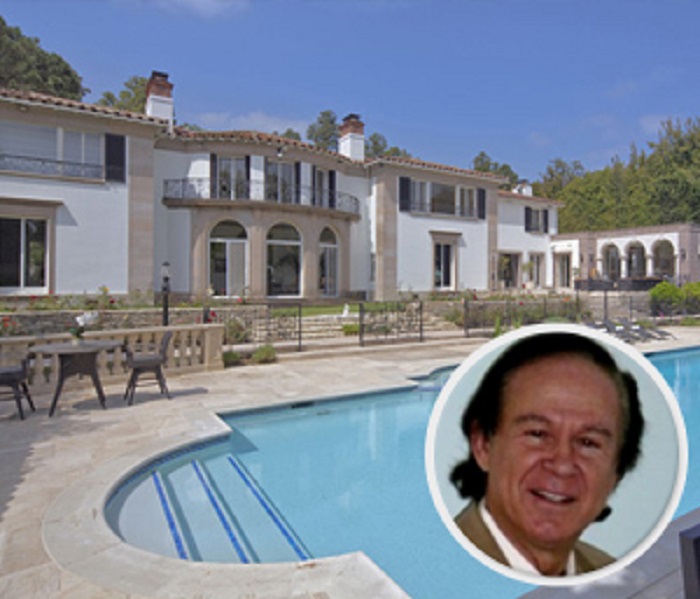 This American actress and singer is a monument in the entertainment industry. Starting in her childhood as a Broadway actress, Pia even tried her hand in Hollywood but her attempts fell flat on its face as she was voted as the worst actress by the Golden Raspberry Awards. The criticism she met with did not stop her from exploring her creative self and soon shut her critics up, not with acting, but as a country singer. Pia scored a beautiful house on the alluring Pacific Palisades and ABR Capital re-designed the pad to give it a current market value of $26 million. Among the other posh amenities that this crib possesses, are a swimming pool and an athletic complex that helps her burn those calories by shooting hoops and lifting weights. 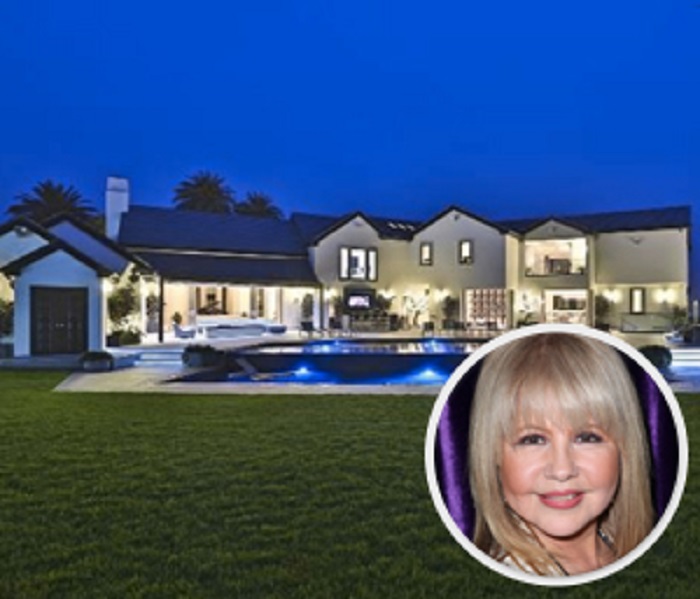 The prime reason why I first fell in love with the game is Michael Jordan. He was recently was added in the elite billionaire list, all thanks to his endorsement deals and his NBA team Charlotte Hornets. The most decorated player in NBA ever, this legend’s house is a town in itself, spreading over six-dozen acres. Inside this eye-popping plot is a golf course, swimming pools, 24 custom made bedrooms with attached baths, and obviously, two basketball courts. Even if you are on a plane, it would be impossible to miss this expansive plot in the wealthy suburb of Highlands Park, Illinois, that is now worth $29 million. 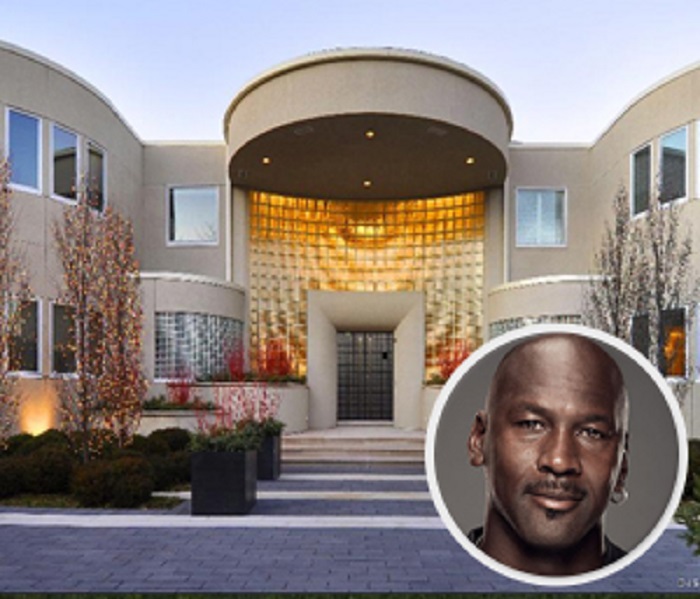 Named as the greatest Hollywood Female star by the American Film Institute, Hepburn was a leading lady for six decades. She bagged a record four Academy awards by proving herself versatile in different genres, from horror to comedy. Unlike most Hollywood stars that prefer to live in the limelight day in and out, Hepburn bought a house in an isolated spot in Connecticut in front of the Atlantic Ocean. With a spread of 8,000 square feet, the mansion consisted of a total of 13 bedrooms and bathrooms and her guests have access to two separate beaches, with one side of the harbor designed to keep the waves or current from sweeping her loved ones away.  The house is currently priced at $30 million. 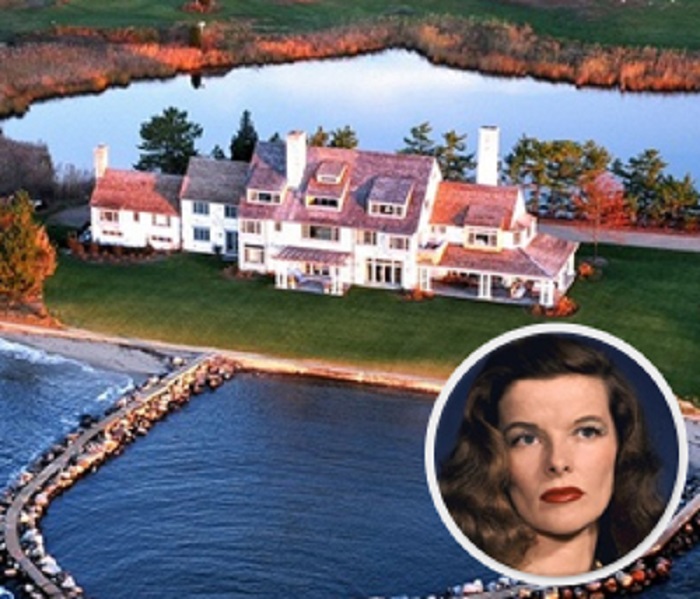 Referred to as “Joe Cool” or the “Comeback Kid”, Montana is unarguably one of the greatest quarterbacks to have graced American Football. Soon after winning the college national championship with Notre Dame, Joe started his NFL career that spanned fourteen years. He was the first player to win three ‘Super Bowl Most Valuable Player’ titles before he was matched by Tom Brady earlier this year. Joe went on to win a total of four super bowls and while his life on the pitch was illustrious, that off it is equally dazzling. A proud owner of a $35-million, 21,000-square-foot house, Montana’s house boasts of epitomized architectural brilliance with no exaggeration. Inside this wide-spread mansion is an equestrian track as he and his wife loves horseback riding, an olive garden, swimming pool, a skeet shooting range, a bocce ball court and inside customized interiors including a massive LED screen pimped with surround sound and a beer tap, that suits a Sunday game day to perfection. 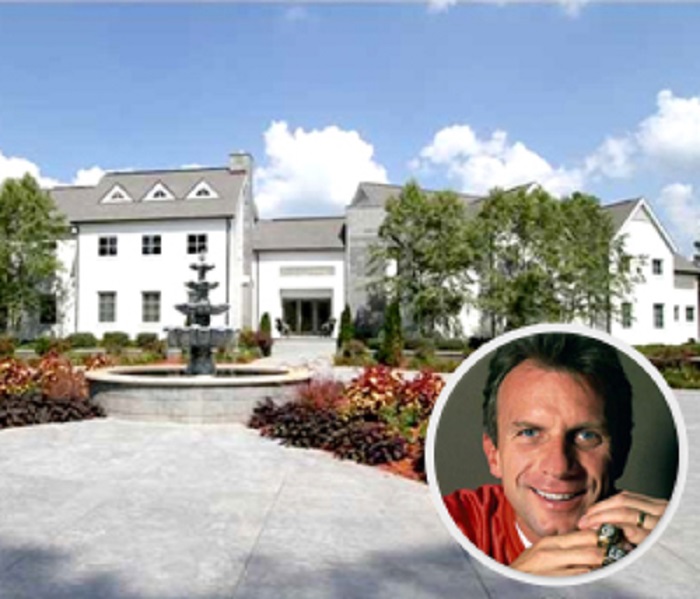 Probably the first time in his entire life when he made the world sad was when he decided to take his own life in 2014. Starting out as a stand-up comedian in the 70’s, Robin has since over the decades left his admirers in hysterics. Sprawling over the Napa Valley, Robin’s house is now currently priced at $35-million and considering it has amenities such as two panic rooms, an infinity pool, a barn, 24-acre vineyard and an oak-paneled library, it seems only fitting that to own this legendary comedian’s house, you need to splurge that much. In addition, it has legacy written all over it. 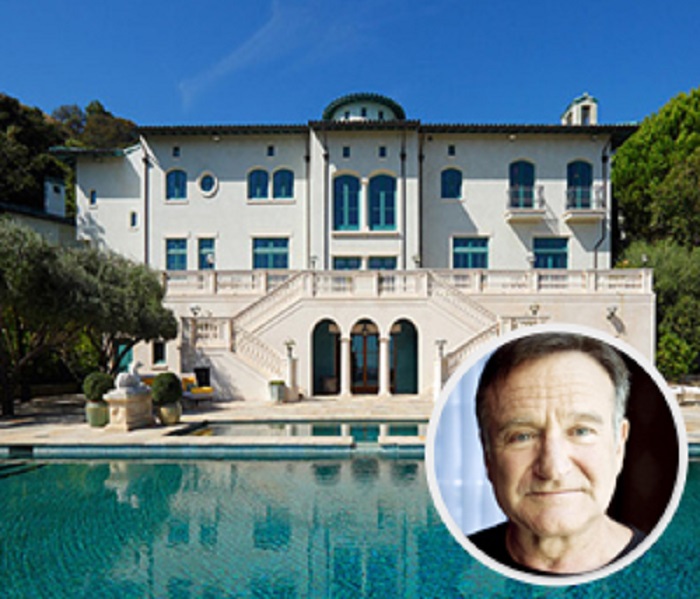 With a conjoint net worth flirting a little over a billion, this superstar couple has hit the right notes in terms of business and music contracts. With an income as large as theirs, one wouldn’t hesitate to rent out a huge mansion, and I mean mammoth, that it actually costs them $400,000 a month to reside in it.  The property known as “Sandcastle” has a bowling alley, a movie theatre with customized surround sound, a skateboarding rink and an infinity pool amongst the other plenty of luxury amenities. 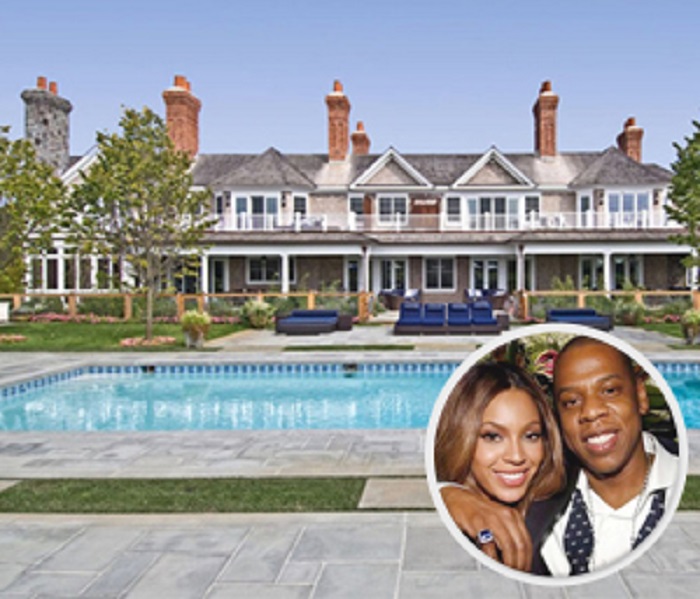 The former CEO of Warner Brothers and Yahoo, Semel is now worth over half a billion. He worked with Warner Brothers for 24 years and Yahoo for 6 years before stepping down over the dissatisfaction of the shareholders of Yahoo. He even contemplated taking over Google but his offer of $1 billion to take over Google was overruled by founder Larry Page. Currently, Semel resides by the filthy rich area extending over Malibu beach with his wife and four children. The plot is currently priced at $50 million and stands three stories tall along with a guest house that is expansive in itself. With being just 40-feet away from the Pacific Ocean it’s almost redundant to mention that he has an entire pavilion to screen his movies. Or is it? 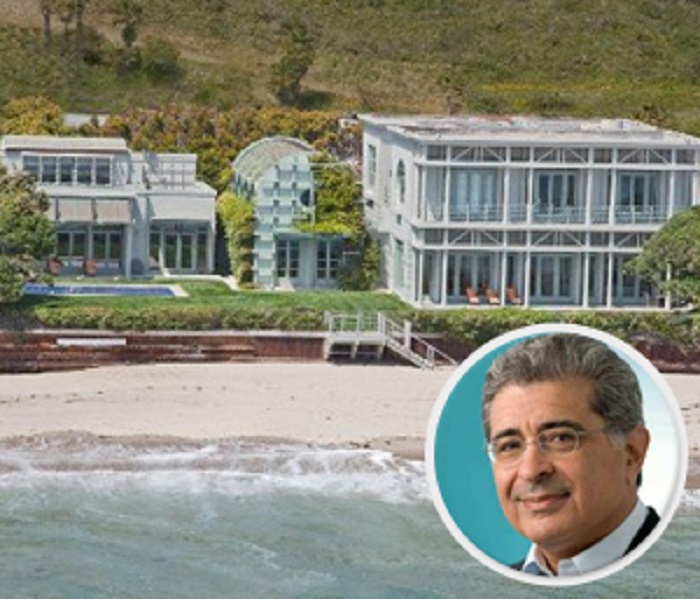 If you have paid attention to or are an admirer of even a fraction of the fashion world, then it is nugatory to even describe who this man is. The king of the fashion world, Gianni at the time of his death was worth $800 million, which can be equated to more than a billion today. Versace’s mansion, which is now quoted at $125 million, boasts of pristine architectural brilliance. It possesses a 50-foot long pool lined with 24-karat gold and is so ahead of its time that realtors are considering converting this mansion into a luxury hotel as the price of it is way beyond the asking price of those interested. 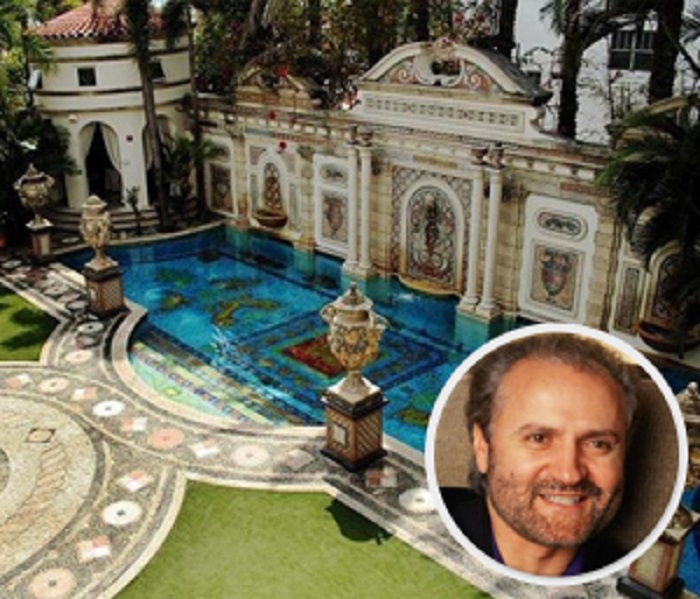