Megan Everett is an Irish-American writer, screenwriter, and producer, known for her children’s book, ‘Banned from the Zoo’ and documentary films, including ‘Behind the Scenes: The Filming of Bye.’ Everett is better known as the second wife of the renowned Swedish actor Stellan Skarsgård, who is famous for such movies as ‘Mamma Mia!,’ ‘Thor,’ ‘The Avengers,’ and many more. She worked in Ireland with a video production company and also a prominent advertising company. She has also produced documentary films and worked as a screenwriter. After dating Stellan Skarsgård for over a year, she got married to him in 2009. The couple has two sons and they reside in Stockholm.

Megan Everett was born Megan Anne Everett on March 3, 1976 in Ohio, US. Not much is available about her family or childhood.

Everett was interested in writing from the very beginning and pursued a writing course. She later majored in the same subject. According to some sources, she went to Ireland after her university graduation.

Everett attended a summer program at the ‘University of Southern California’ to study the basics of screenwriting. She also gained proficiency in screenwriting by joining ‘The Script Factory’ in Ireland.

Megan Everett began her career in Dublin, Ireland, where she worked with the development team of a video production company, ‘Fastnet Films.’ Subsequently, she worked as a copy-writer for the famous advertising company ‘DDB Worldwide.’ Here, she worked for such renowned brands as ‘Volkswagen’ and ‘Carlsberg.’

Thereafter, Everett turned to production work and in 2013, she funded a Swedish dance-documentary film ‘Behind the Scenes: The Filming of Bye.’ She was also the producer of the film adaptation of Stig Dagerman’s novel ‘German Autumn.’

Megan Everett joined a literary club in London, ‘Knight Hall Agency,’ which brushed her writing skills. In September 2017, she published her first work, a children’s book, ‘Banned from the Zoo.’ The book brought her fame.

As a screenwriter, Everett has worked on several Swedish sci-fi TV series. 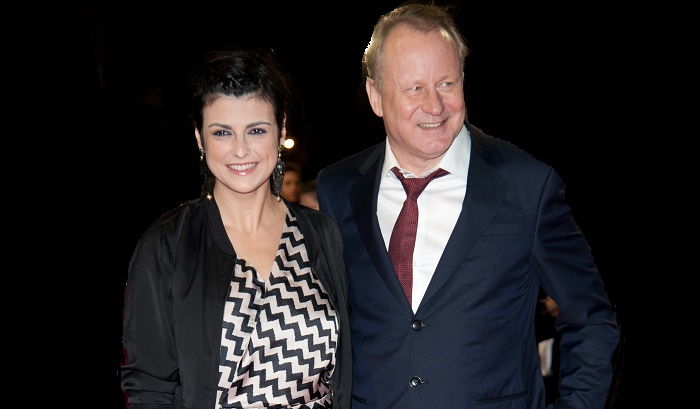 Everett and Skarsgård were first seen together in December 2007, at the premier of the film ‘Arn – Tempelriddaren’ in Skara. After that, the two were often seen together at various international events. They shared a live-in relationship for more than a year. Everett also went to meet him on the sets of ‘Mamma Mia!’ in Greece.

Immediately after the marriage, the couple went to Los Angeles for the ongoing filming of the ‘Da Vinci Code’ sequel, ‘Angels and Demons,’ in which Skarsgård starred with Tom Hanks and Ewan McGregor. While speaking to an Irish newspaper, Skarsgård stated that the couple likes to visit Ireland.

Thus, Everett has six step-children (her first step-son, Alexander, is of her age). Reportedly, she is close to all her step-children, and shares a cordial relation with Skarsgård’s ex-wife, My.

The couple resides in Stockholm with their two sons.