Cristiano Ronaldo Jr. is the first child and the eldest son of popular Portuguese professional footballer Cristiano Ronaldo, who currently plays as a forward for the ‘Serie A’ club ‘Juventus’ and captains the Portuguese national football team. Also known by his nickname, “Cristianinho,” meaning “little Cristiano,” Ronaldo Jr. made headlines and came under media scrutiny after his father shocked the whole world with the news of his birth. However, Ronaldo did not reveal anything about Ronaldo Jr.’s mother’s identity, thus brewing up a major controversy. Ronaldo Jr. is growing up under his father’s care. He followed in his father’s footsteps and ventured into football at an early age, playing with the ‘Club de Fútbol Pozuelo de Alarcón’ in Madrid, Spain. He rose to fame after his father posted a picture on ‘Instagram,’ showing the kid holding the ‘Copa 2017’ and ‘Pichichi’ trophies that Ronaldo won for his team. He stole the spotlight and garnered worldwide attention again, when a short video that showed him impressively tackling the ball went viral online. The young prodigy who often finds place in his father’s social-media posts is often seen accompanying him to stadiums and various award shows and events. 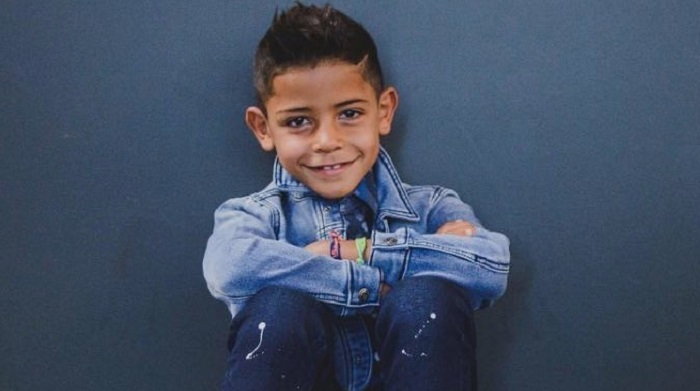 Ronaldo Jr. made it to the headlines when Cristiano Ronaldo, one of the greatest football players of all time, announced the birth of his first child, a boy weighing 9 pounds and 8 ounces. Ronaldo Jr. was born on June 17, 2010, in San Diego, California, U.S., and on July 3 that year, Ronaldo took the world by surprise with the news that he had become a father. The news of Ronaldo Jr.’s birth gave rise to a lot of rumors, as Ronaldo chose not to reveal the identity of the child’s mother. The subject has remained part of a major controversy since then. Although initially speculations stated that Ronaldo’s then-girlfriend, Russian model Irina Shayk, was the mother of the child, it was later confirmed to be untrue. According to sources, the child was born through a one-night stand of the star footballer with an American waitress, while he was playing for ‘Manchester United.’ Reportedly, the woman contacted Ronaldo through his agent Jorge Mendes after she came to know of the pregnancy. 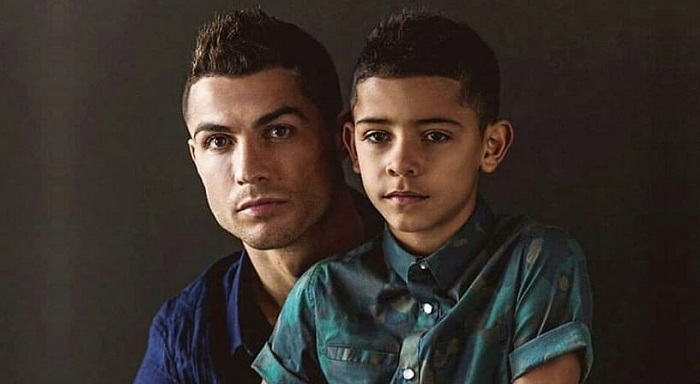 Following this, a DNA test was conducted, which confirmed the unborn child’s father was Ronaldo. As the woman was a Catholic and the option of an abortion was not considered, Ronaldo agreed to take full responsibility of the child. He, however, resolved to keep the identity of his child’s mother a secret. According to sources, the footballer had paid the woman £10 million before taking full custody of Ronaldo Jr. It was mutually agreed that the woman would neither reveal her identity nor contact the child ever. However, it has been reported that the woman is presently studying in Britain, and although she is under the agreement that she would never contact Ronaldo Jr., she is now eager to get in touch with him.

His Rise to Stardom as a Celebrity Kid

Born to Ronaldo, captain of the Portuguese national football team and the then-forward for ‘Real Madrid,’ Ronaldo Jr. has been under constant media glare ever since his father revealed the news of his birth. He started to accompany his father at different stadiums, events, and functions from an early age. These include the 2013 ‘FIFA Ballon d’Or Gala,’ where he was seen accompanying Ronaldo and Irina Shayk. He took to football like his father and started playing the game in a small club called ‘Club de Fútbol Pozuelo de Alarcón,’ in Madrid, Spain, in 2016.

He has also become famous online, after being featured in several posts of his father on various social-media platforms. One such earlier post, a video uploaded in April 2017, showed the boy gearing up for a free kick in the renowned and signature pose of Ronaldo and then netting an astounding goal. Another post, which Ronaldo uploaded on his ‘Instagram’ account on June 6, 2017, showed the boy holding two trophies, the ‘Copa 2017’ and ‘Pichichi,’ both of which the footballer had won for his team. 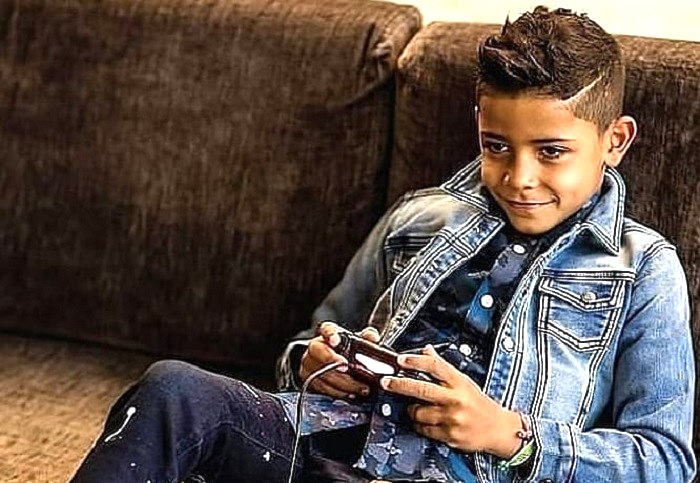 Besides becoming famous as a star kid, Ronaldo Jr. has also caught attention lately for his impressive skills with the ball, seen in the short video that went viral on the internet in June 2017. The video gained the young prodigy worldwide media attention. After beating ‘Juventus’ by 4-1 and winning the 2016–2017 ‘UEFA Champions League’ on June 3, 2017, at the ‘Millennium Stadium’ in Cardiff, Wales, U.K., the ‘Real Madrid’ players paraded with the trophy on the streets of Madrid before gathering at the ‘Santiago Bernabéu Stadium’ to celebrate their victory. 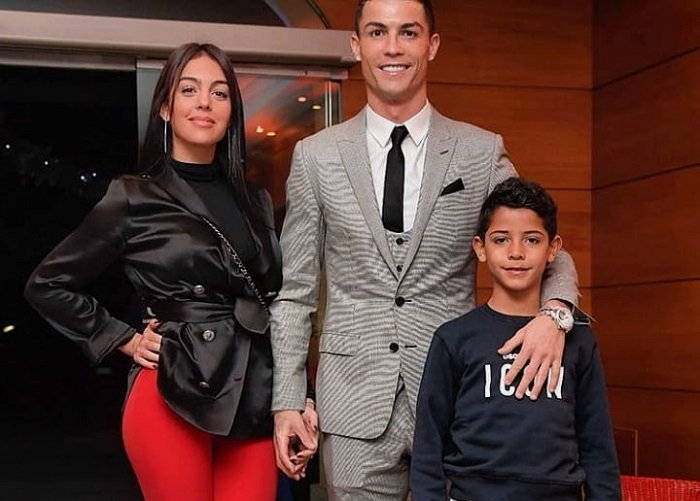 Ronaldo Jr. went to attend the celebration with his father, grandmother, uncle, and Georgina Rodriguez (Ronaldo’s girlfriend). While celebrations were in full swing, Ronaldo Jr., wearing the club’s purple jersey, stole the show with his eye-catching performance with the ball while playing with a few other kids. The young talent was seen skilfully dribbling the ball after picking it from the penalty area and then moving past two older kids. He managed to finally beat the goalkeeper and hit the ball into the bottom corner of the net. Fans of the team and Ronaldo, who were present there, were thrilled to see the performance of the kid. The entire event was captured by a ‘Real Madrid’ fan in a 20-second video. Soon, the video made its way to major news publications and also gained considerable popularity on social media. A football enthusiast, Ronaldo Jr. has also posed with legendary football players Pele and Diego Maradona. 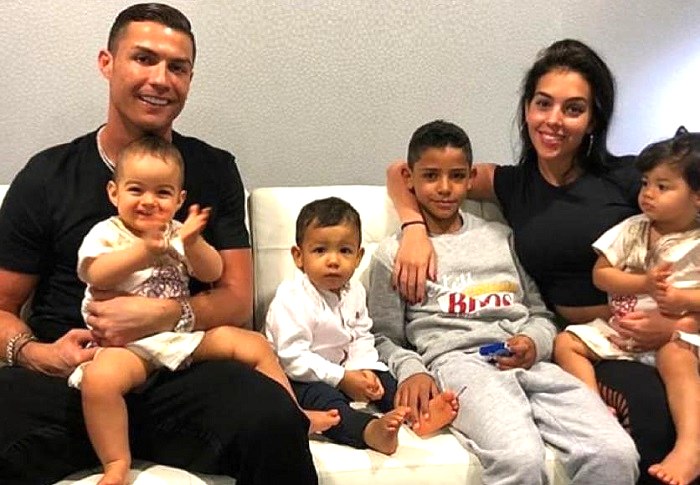 His Family and Siblings: A Happy Bunch

Ronaldo Jr. has three siblings: twins Eva Maria and Mateo Ronaldo, born in the U.S. through surrogacy on June 8, 2017, and sister Alana Martina, born on November 12, 2017, to Ronaldo and his present girlfriend, Spanish model Georgina Rodríguez. He presently lives in Spain with his father; his siblings; his grandmother, Maria Dolores dos Santos Aveiro; and Georgina. He also has two aunts, Elma and Liliana, and an uncle named Hugo. Reportedly, Ronaldo Jr. was told that his mother had passed away long back. His father mentioned that Ronaldo Jr. once wished for six siblings. If that happens, Ronaldo would have a brood of seven children, to match the magic of his brand, ‘CR7.’