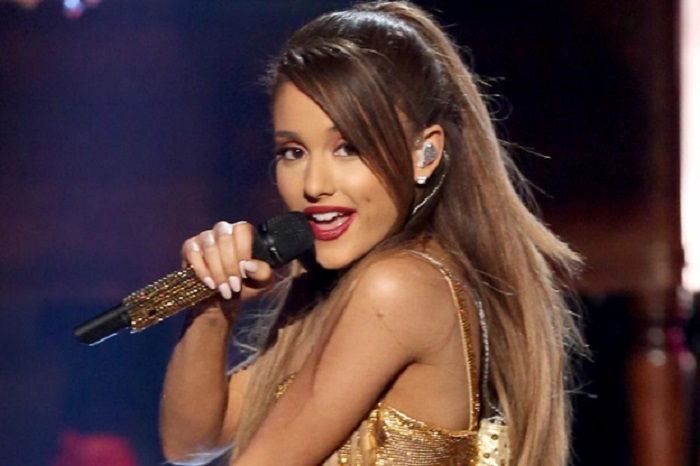 A teenager TV star turned popular diva, Ariana Grande shot to fame in the middle of 2010 as a successor to the throne of American singer Mariah Carey. Ariana is blessed with amazing vocals and music was always her first love. However before entering the world of music, Ariana dabbled in acting and received much adulation for her role as Cat Valentine in “Victorious”, one of the hit shows on Nickelodeon.

Ariana was born on 26 June, 1993, in Florida to Edward Butera, a graphic designer and Joan Grande who was the CEO of Hose- McCann Communications. She was raised with an older brother Frankie, who starred in “Big Brother 16”. The R&B singer shared a great relationship with her deceased grandfather, Frank Grande. 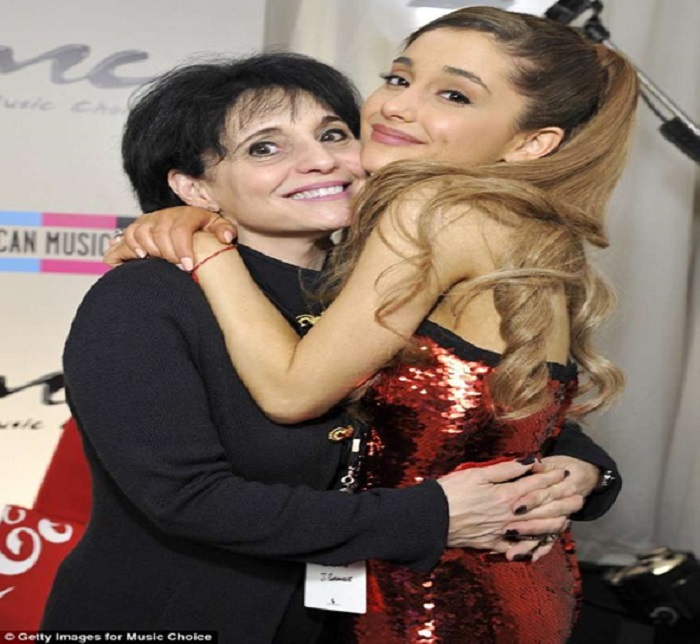 Ariana Grande made her first breakthrough in 2008, at the age of 15 where she played the role of Charlotte in the Broadway Production of 13. The play focused on life in New York and she won a National Youth Theatre Association Award for her role and then she was seen performing the role of Miriamin “Cuba Libre”, one of the Desmond Child’s musical.

You would hardly find a pop star like Ariana today. Ariana is a heartthrob of many teens across the world. To know more about the beauty, let’s check out some interesting and rare facts which you may not know.

You might know Ariana’s full name is Ariana Grande Butera but did you know that her name was inspired by Princess Oriana of ‘Felix the Cat’ movie? 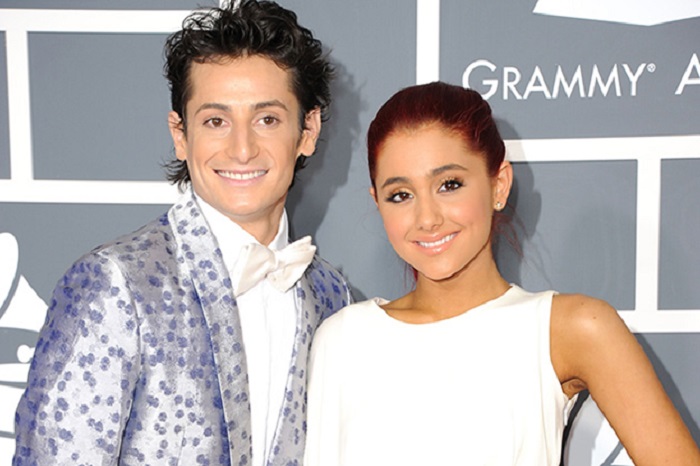 Ariana’s elder brother is Frankie James Grande who is a producer-actor and was a contestant of the 2014 season of Big Brother, a reality TV Show.

Not only is our favorite a talented singer but she also has a golden heart. A hardcore pet lover she has six dogs and her love for the canines is evident in the dog beds that you’ll find in every nook and corner of her house. She makes sure her pooches—Coco, Ophelic, Fawker, Cinnamon, Sirus Black and Teulouse—have the best of everything and she loves to spend time with them.

4. Allergric to Cat and Banana

In her first major acting appearance she portrayed a character that was head over heels in love with cats. But in reality, Ariana is allergic to cats. She is allergic to bananas too. She can’t even think of eating them.

Our favorite pop star is a firm believer of ‘you’re what you eat’. As a child she was never very fond of non-vegetarian food but in 2013, she turned 100% vegan and even abstained from using products made from animal derivatives. Her tweet stating her decision went viral and even the animal rights organization PETA thanked her for the initiative to not support animal cruelty in any form.

Not many know but this talented singer is a horror movie freak and loves nothing more than catching up with her all-time favorite scary movies – The Ring, Paranormal Activity and Jaws.

As a kid, this singing diva used to give her mother sleepless nights, who would worry about her daughter turning into a serious killer. Ariana would often get her face painted as a skeleton and roam on the streets with a hockey stick in hand donning a Freddy Krueger’s mask.

Ariana began singing when she was just 10 years old. She also co-founded a youth singing group named ‘Kids Who Care’, which performed for charitable events.

Video games and girls rarely go hand-in-hand but apart from belting out chartbusters, this singing sensation is exceptionally fond of playing video games. 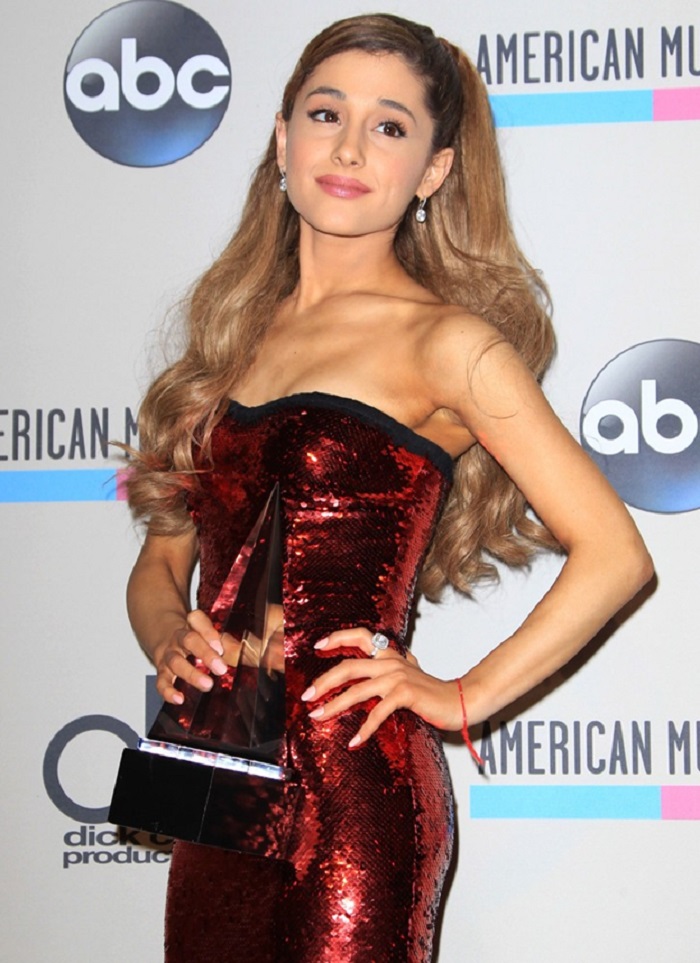 Ariana has a long list of nominations and awards since she started her career. In 2008, while she was still a student, she won National Youth Theatre Association award. Other awards that were conferred upon her include American Music Awards, BET Awards, Billboard Music Awards and Grammy Awards.

Arian’s favorite movie of all time includes Bruce Almighty; she has seen the movie countless times and yet never gets bored. American Beauty and 13 Going On 30 are few of her other favorite flicks.

The diva’s favorite color is Lavender and the shade rules her wardrobe. She even has accessories and gadgets in the hue. 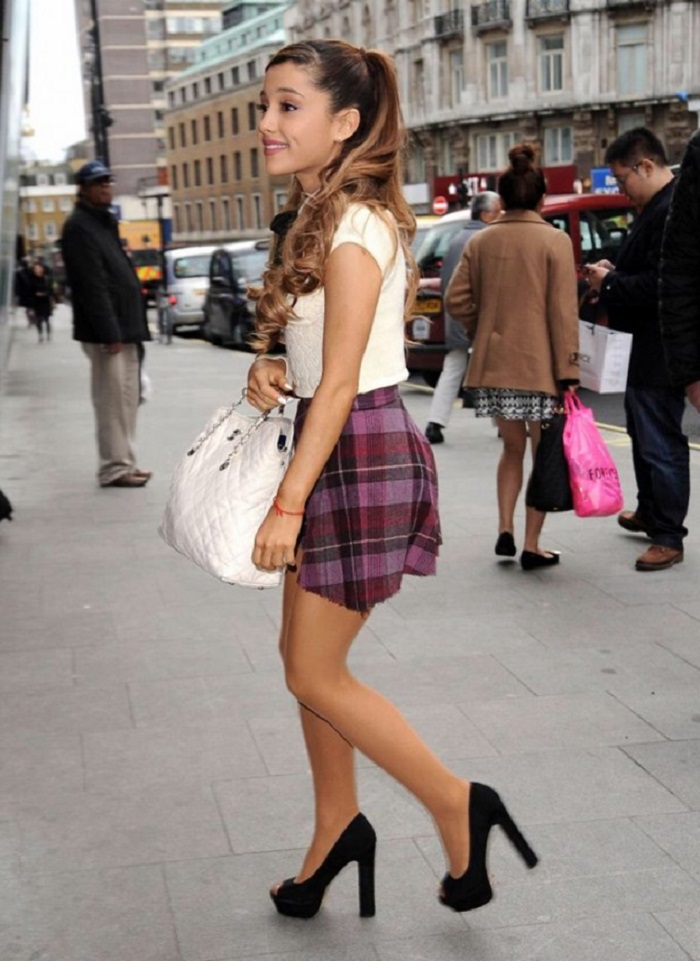 A girl can never have too many shoes and the sky-high heels are definitely one of Ariana’s true love. The singer is hardly seen without donning a pair.

This singer with a mesmerizing voice unfortunately suffers from bad eye sight and uses contact lenses. 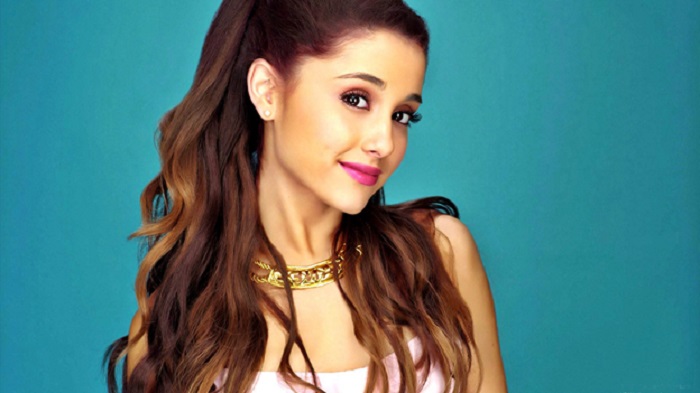 Ariana was the first female artist to produce two consecutive albums – ‘Yours Truly’ and ‘My Everything’ – that featured at the top of Billboard 200 chart.

Encouraged by her grandmother, who was an advocate for sleeping naked (many consider it beneficial for health), Ariana sleeps in minimal clothes.

The beach is where the singer makes a beeline to unwind. A nature lover, she is particularly fond of oceans and the wonderful sea creatures.

Our favorite pop diva is best friends with Alexa Luria since the age of ten. The two appeared in the musical 13, which marked the debut for Ariana in the world of acting.

Ariana Grande has 3 wisdom teeth and plans to get them extracted but we guess the thought of visiting the dentist gives her cold feet.

Ariana Grande was in relationship with Nathan Sykes a member of the British-Irish boy band ‘The Wanted’. The couple however parted ways after a short while and since then the pop diva has had two more relationships with web video star Jai Brooks and hip hop recording artist Big Sean.

Though hard to believe, this popular singer-dancer hates the way she swears and terms herself as possessing a “sailor mouth”.

The singing star loves to get her hands dirty in the garden and also likes to bake.

Ariana has a birthmark on her left shoulder, which she thinks is lucky for her. She also has a dimple on her left cheek which lends her a very cute look.

For all the fans of this popular singer, you can find footage of her live shows, cover songs and latest videos on YouTube. She has an official channel on the video sharing website since 2007. 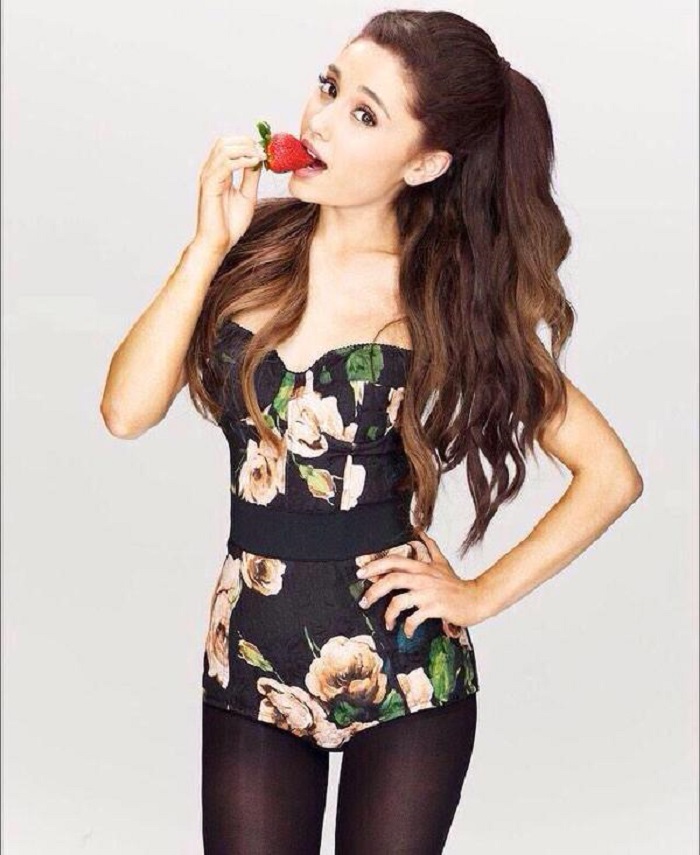 Strawberry is her all time favorite fruit and she is known to eat as many as five to six strawberries in a day. Also, she is fond of Strwberry flavored icecream.

The star is also known to have mood swings. Though a very amicable person, sometimes Ariana likes to enjoy the peace and tranquility in solidarity and watch romance and comedy sitcoms.

No brownie points for guessing her favorite song; the track “One Thing” by the band “One Direction” is her favorite number.

Though Ariana Grande is scared of heights, she loves to enjoy the roller coaster.

The famous singer was a bright kid and her favorite subject in school was science. 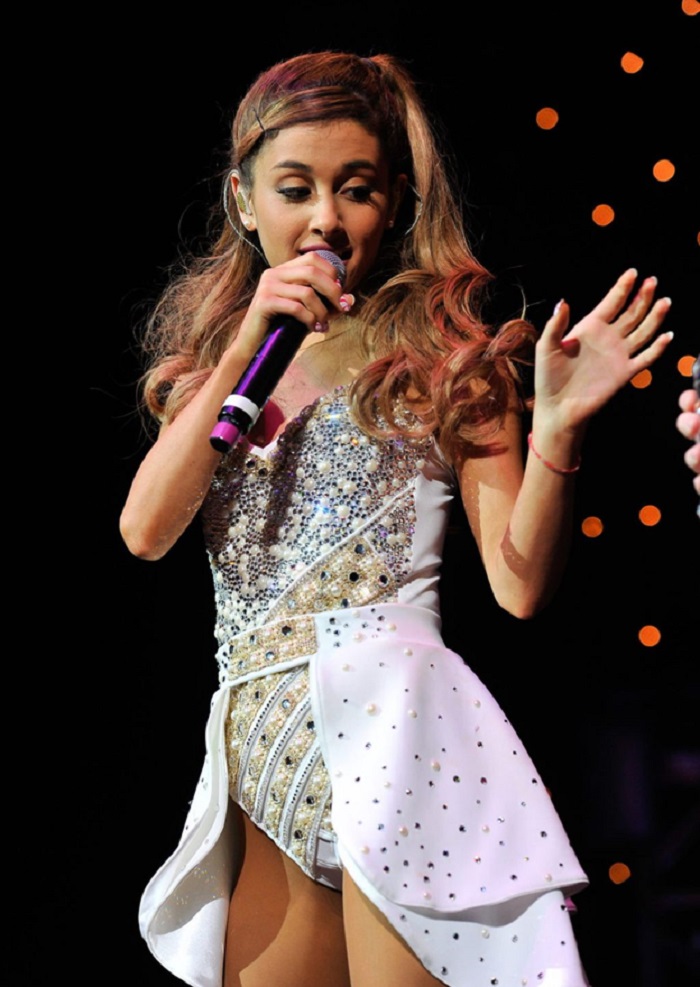 Not only has she got a mellifluous voice but is also a skilled rap artist. During her appearance on the Tonight Show starring Jimmy Fallon, she sang a rap number.

Ariana Grande has over more than one million of followers on Twitter, and she has been named ‘the most asked actor online’, ranking above Charlie Sheen and Reese Witherspoon. She ranks 37 among the most re-tweeted person on the micro-blogging site.

Ariana enjoys watching her favorite T.V show “Gossip Girl”, whenever she gets time from her busy schedule.

Ariana also likes writing blogs and recently she has penned a comprehensive piece on ‘bullying’.

Ariana Grande had her first crush at the age of three, on the singer-actor, Justin Timberlake.

The pop princess calls a 100-year-old house as her residence, which was previously inhabited by the likes of Francis Ford Coppola, the director of acclaimed ‘Godfather’ movie.

A socially amicable person the teen star is known to pass a smile even to a stranger and hates people who do not smile back or reply.

She naturally possessed brown and curly locks, which she straightened and dyed red for her role of Cat Valentine in the TV sitcom Victorious. 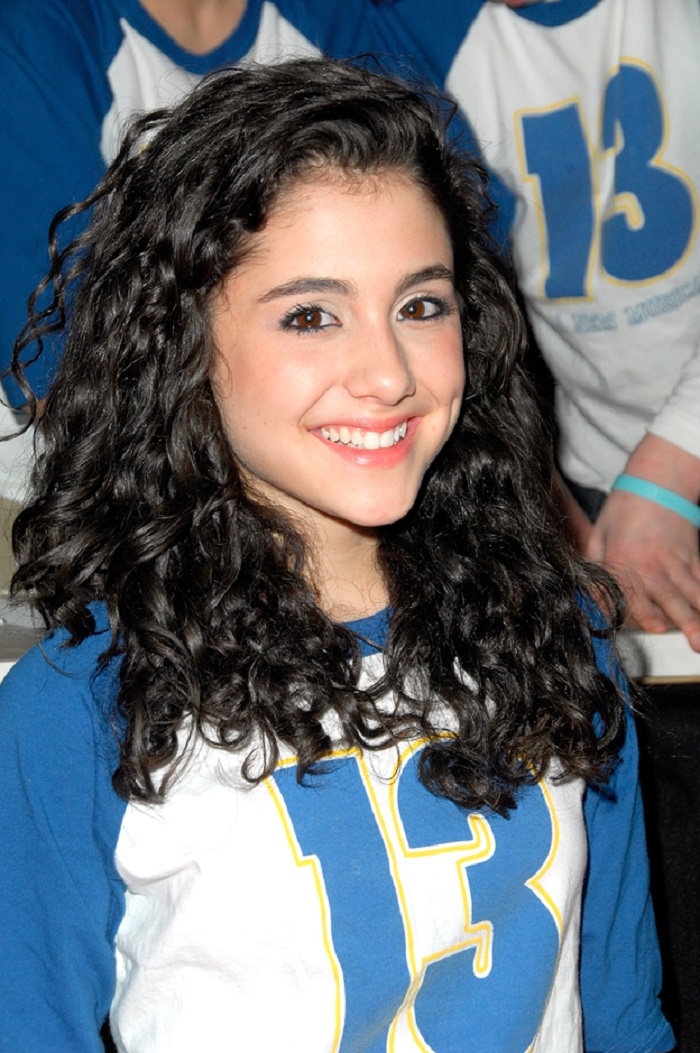 The pop diva is a big fan of hockey. She used to watch every home game played by the Florida Panthers, despite getting hit with hockey pucks.

Ariana carries three tattoos with her, out of which one displays the word “bellissima,” a nick name given to her by her grandfather. 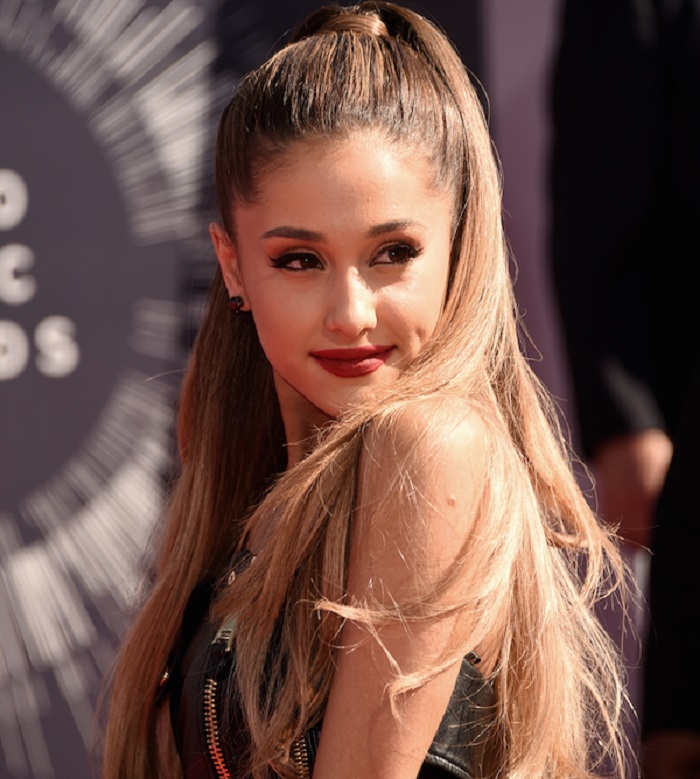 The singing star is spotted with her trademark pony tail on many occasions. Many don’t know but she suffered from hair loss after having to dye her hair repeatedly for her role in Victorious. Naturally a brunette, she loves to wear her hair brown and also uses hair extensions.

43. No relationship with father

Ariana Grande’s relationship with her father has been strained since 2013. Though the star has expressed grief over not being on good terms with her father, she has not disclosed the reason for the tiff.

The popular singer is also highly superstitious and believes in demons. She was in the hobby of collecting their pictures into a folder but, deleted the same when weird things started happening to her.

She is hypoglycemic and her blood sugar levels go down if she stays hungry for longer stretches of time. Thus she always keeps a bar of her favorite chocolate handy.

She believes whatever happens in our lives is for good and happiness is the key to success. We should strive hard to achieve our goals and leave everything else to the Almighty.

Artists like Frank Ocean, Michael Jackson, Imogene Heap, and Marian Carey are her favorite artists. When asked who she would like to invite for a tea-party, the pop diva named Leonardo Dicaprio.

Ariana is very emotional girl. When she met Jim Carrey, the star of her favorite movie, she was overwhelmed with emotion and could not stop crying.

Ariana, the pop princess has reached heights in the musical industry. As per the records of Celebrity Net Worth in 2014, she had a net worth of twelve millions US dollars. Along the way, Ariana has built powerful presence in the social media and is one among the “Most Asked Actor”. The singer strives to live her life to the fullest. Also she wants to be very famous among all the other singers and dancers. Ariana is very famous for her music career and also for her role as Cat Valentine in Nickelodeon’s Victorious.