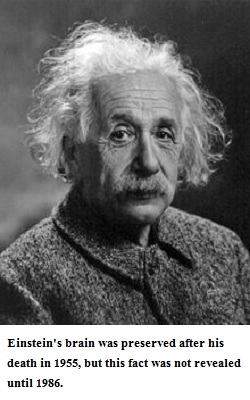 On 14th March 1879, a little boy called Albert Einstein was born in Germany who went on to dedicate his life to the world of science. His name has become synonymous with words such as genius and mastermind. The theories that he comprehended decades ago and the brilliant mathematic equations he invented are small proofs of his intelligence.

On 17th April 1955, Albert was admitted to the hospital because of internal bleeding triggered by the swelling and rupture of the largest abdominal artery. A surgery had been performed on him earlier due to the same problem, but this time he refused it. He said, “I want to go when I want. It is tasteless to prolong life artificially. I have done my share, it is time to go. I will do it elegantly.” On 18th April 1955, the world lost an undisputed genius; while at the Princeton Hospital, New Jersey, he mumbled a few words in German, took two breaths and died. The nurse on duty did not understand the language and hence we have no clue about what Einstein’s final words were.

A day after this legendary physicist was cremated his son got to know that the Einstein’s body in the casket was not untouched.  This was the beginning of an uncanny story that involved a stolen brain, a dead virtuoso, a pathologist and his wild ideas. Thomas Stoltz Harvey was responsible for performing an autopsy on the ground-breaking scientist, during which, according to the regular procedure he removed the brain for examination. However, instead of putting it back into the skull after examination he put it in a container of formaldehyde. Harvey wanted to preserve the encephalon since he believed that in future, neuroscience would be able to explain what made this particular theoretical physicist abnormally intellectual. The picture below shows the lateral sulcuss in red. 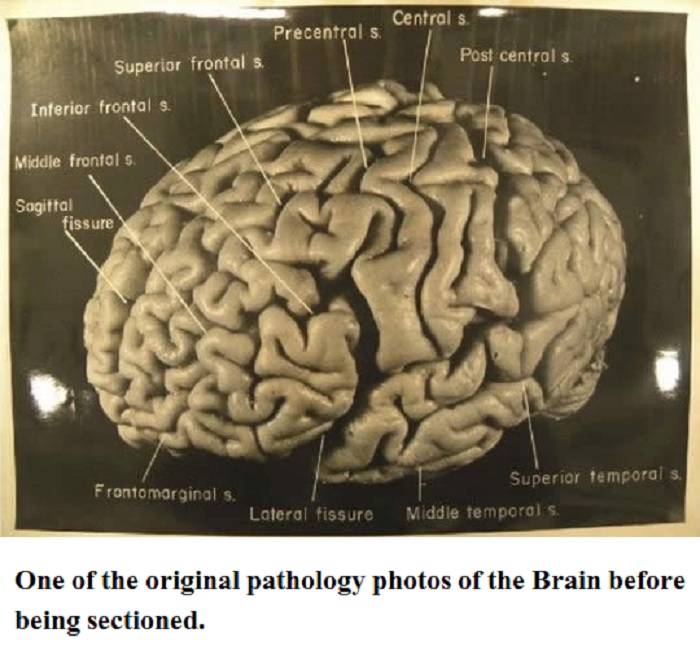 The result of the autopsy revealed that the legend’s brain weighed 1,230 grams which was what would be the same as that of any other human being. Hence the myth that intelligence and brain size is directly proportional got busted that very moment. Harvey injected the internal carotid arteries of Einstein’s encephalon with 11.4% formalin. Once that was done, he suspended the same in 10% formalin. He then took pictures of Einstein’s brain from various angles, after which he divided it into 240 fragments and encased each of them in a plastic-like material called collodion. The pathologist created 12 sets containing 200 slides each, which comprised tissue samples of Albert’s brain. While Thomas retained 2 sets for his own examination, he distributed the rest of the samples to other pathologists who were big names in the same field. This is a picture of the mastermind’s brain  before being sectioned. 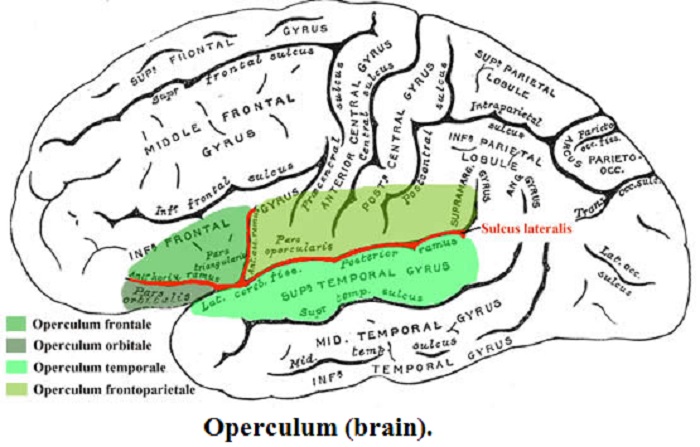 The year 1978 was extraordinary for the doctor, since Einstein’s brain was “rediscovered” in his ownership. Reliable sources have put forward a report regarding the inventor’s encephalon; some say that the sections responsible for speech and language are smaller, while the regions involved with numerical and spatial processing were larger. Other reports claim that when compared to other human beings, the neurons in the brain and his peripheral nervous system were supported and protected at an all new by an amplified number of Glial cells.

Thomas claimed that the astute scientist’s encephalon lacked parietal operculum in both the hemispheres, but very soon these reports were rubbished. An expert team at the McMaster University in Hamilton carried out advanced investigations and in the year 1999 they revealed that parietal operculum region in the frontal lobe was empty. They went on to claim that the bordering region called the lateral sulcus was also found missing. The scholars of this university feel that it is due to the absence of these regions in his brain that the neurons communicate a lot better. “This unusual brain anatomy… [missing part of the Sylvian fissure (Lateral Sulcus)]… may explain why Einstein thought the way he did.” All these analyses have been made based on the photographs that Harvey took before segmenting the brain into 240 pieces and not by actually investigating it in real.

We lost Harvey too in the year 2007, but till the very end he held on to his faith of discovering something unusual in the scientist’s brain. During his last few days, he returned Einstein’s brain to the Princeton Hospital—the place he had stolen it from. Thomas’ successors have given back everything that he owned with respect to the physicist’s encephalon, including the 14 photos, to the ‘National Museum of Health and Medicine.’