Famous As:- Wife of Mike Pompeo

American former banker and philanthropist Susan Pompeo is better known as U.S. Secretary of State Mike Pompeo’s second wife. Susan is accomplished in her own right. Apart from serving as the senior vice president of ‘Emprise Bank,’ she has been associated with a host of charitable and fundraising organizations. Susan has also been actively associated with her husband’s congressional campaigns. She even appeared in a 30-second commercial titled ‘Susan’s Boots,’ to promote her husband. Though her husband works in Washington, D.C., Susan is a true-blue Kansas girl at heart and visits her hometown often. Although her frequent official trips with her husband have dragged her into controversies earlier, she has dismissed them as attempts to defame her. 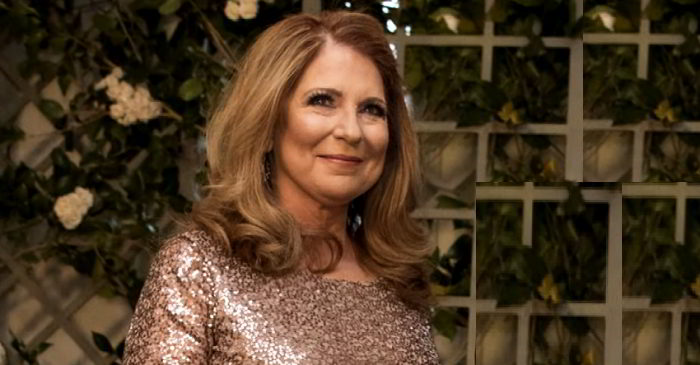 Susan Pompeo was born Susan Justice Mostrous, on February 1, 1965, in Wichita, Kansas, United States. She graduated with a degree in communications from the ‘Wichita State University.’

After leaving the university, she worked with the ‘Wichita State Alumni Association’ and helped them in raising funds and in organizing alumni events in the United States. She continued to work with the ‘Delta Gamma Fraternity.’ Susan has also served on the boards of ‘Music Theater of Wichita,’ ‘Arts Partners,’ the ‘Wichita Art Museum,’ and the ‘Jr. League of Wichita.’

She eventually became the president of the ‘WSU National Alumni Association’ and a senior vice president at ‘Emprise Bank.’ While working at the bank, her main task was to help small business owners. She also became the founder of the private division of the bank. After serving the bank for 15 years, she left it. Later, she also accepted the invitation to serve as the honorary president of the ‘Associates of the American Foreign Service Worldwide’ (AAFSW) in 2018.

She has also been involved in her husband’s political career and has campaigned for Mike’s 2010 ‘House of Representatives’ election, appearing in a 30-second advertisement named ‘Susan’s Boots.’ She also supported Mike’s congressional campaign in 2016, appearing in the ‘Susan’s Boots’ ad again.

After Mike Pompeo was appointed as the ‘Central Intelligence Agency’ (CIA) director (on January 23, 2017) and then the U.S. secretary of state (on April 26, 2018), Susan became more involved with Mike’s administrative duties. She also volunteered to become the ‘Family Advisory Board’s honorary chair. 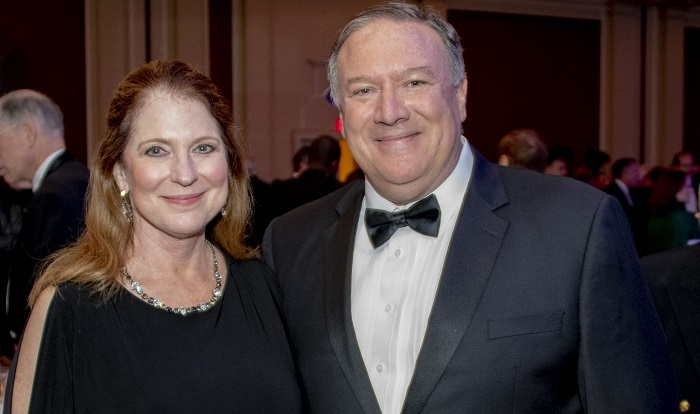 Susan Pompeo has also been associated with the ‘Dwight D. Eisenhower Excellence in Public Services Series’ and supports women’s representation in ‘Republican’ politics. The organization holds events every Saturday and encourages woman from Kansas to join politics. It is believed, from 2007 to 2008, Susan donated around $3,500 to this organization.

In 2014, Susan criticized Mike’s performance on the ‘House Select Committee’ on Benghazi. While Mike had the opportunity to discuss the attack on Libya with Hillary Clinton, Susan believed he did not do too well.

In February 2020, Susan announced she would be supporting the Kansas’s 3rd Congressional District candidate Amanda Adkins, by organizing a fundraiser in Washington on February 25 and will be appearing as the special guest at the event. 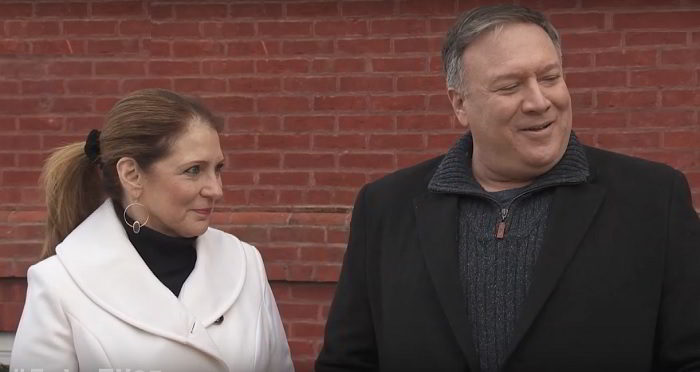 Susan Pompeo has often been criticized by the media for considering herself the “First Lady of CIA” and for using office resources, including supplies, personnel, and floor space, for her personal use.

She once received a lot of criticism for traveling to Britain and Fort Monckton, while Mike was on an official visit. Susan also apparently stayed at ‘The Farm,’ a hidden ‘CIA’ training center, which enraged the public. However, the authorities at ‘CIA’ later dismissed the allegations as an attempt to defame Susan. 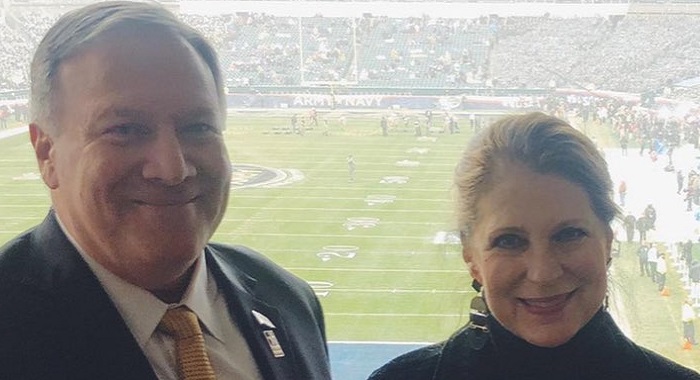 In 2019, she was criticized for traveling with her husband to the Middle East for 8 days, during the “shutdown.” This was at a time when the government staff were not being allowed to travel for work or use their work phones. Rumors stated she had a host of unpaid staffers who ran errands for her and even accompanied her to shopping trips.

The government played down the incident, saying Susan was just on a “working trip” and was there to meet medical officers, tour housing, and write and comment on her experience. 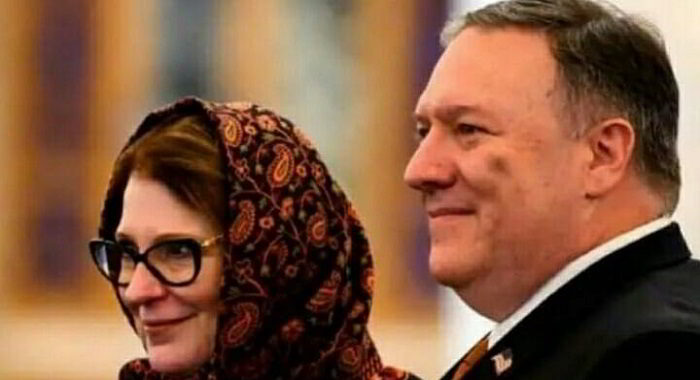 Her Relationship with Mike

Mike Pompeo had married Leslie Libert in 1986. The couple divorced in 1997.

When Mike met Susan, she worked as a banker. Back then, she was working on a deal in which ‘Thayer Aerospace’ got hold of one of her clients. Susan reportedly described her work at the bank as “very relationship-driven.”

She said that when she first came to know Mike, he appeared to be “very Kansan” and “easy to be around.” Their first date was at Wichita’s ‘Orpheum Theatre,’ which Mike was working to restore by raising funds. 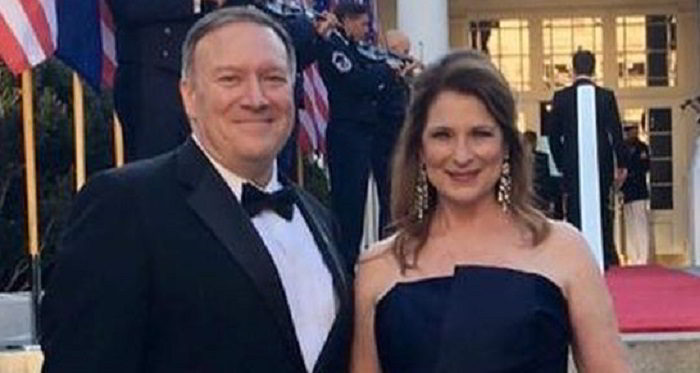 Susan and Mike got married in 2000. Following this, Mike adopted Susan’s son, Nicholas (or “Nick”), who was born out of Susan’s previous marriage. Nick reportedly lives in New York and works at a tech start-up. Nick is a fan of basketball, much like his parents, and is a huge fan of the ‘Wichita State’ team. 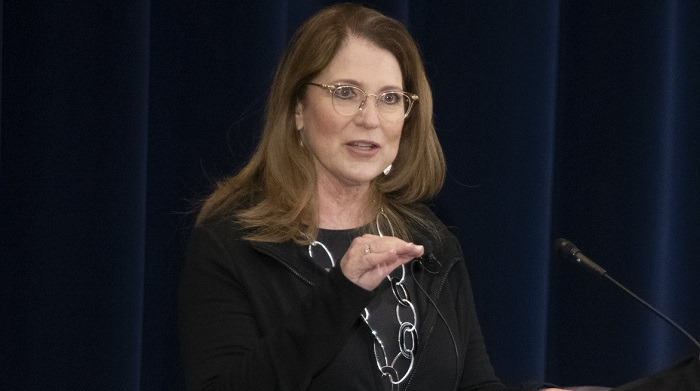 She loves her hometown, Wichita, so much that even after they moved to Washington, D.C., Susan would visit Wichita with Mike almost every weekend.

Like most ‘Republican Party’ members, Mike and Susan Pompeo are staunch Evangelicals. They are against gay marriage, cheap health care, and abortion. They also do not believe climate change exists. They attend the ‘Evangelical Presbyterian Church’ regularly.