Robert Irwin is a well-known Australian television personality, a nature photographer and an avid champion of wildlife and environment conservation. He is from a family that has dedicated its life to wildlife and environment conservation. His father, Steve Irwin, was popularly known as ‘Crocodile Hunter’. At a very young age, Robert has achieved remarkable success and has won numerous accolades for his photography and conservation work. He has also appeared in numerous wildlife and nature talk shows on television including ‘The Tonight Show with Jimmy Fallon’. He also appears in Australia Zoo internal television network. 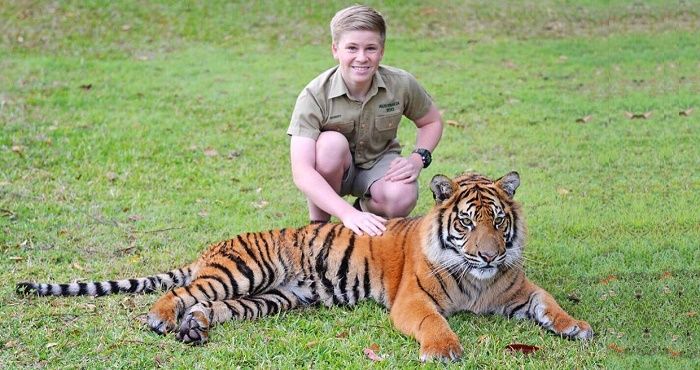 Robert Clarence Irwin was born on 1 December 2003, to Steve and Terri Irwin. He was named after his grandfathers – Robert Bob Irwin and Clarence Raines. He is the second child of his parents and has an elder sister named Bindi Irwin.

His father, Steve Irwin, was an Australian zoo keeper and a television figure who also worked as an environmentalist and a conservationist. His mother, Terri Raines, hails from Oregon, America and has been a wildlife enthusiast since her early life. His grandfather, Bob Irwin, was also a wildlife expert who established the Beerwah Reptile Park in Queensland in 1970 which is now known as the Australia Zoo.

Steve and Terri co-hosted the famous documentary series, ‘The Crocodile Hunter’, which was a worldwide success. They later worked together in numerous other wildlife series. In 2002, the couple established the non-profit charity ‘Australia Zoo Wildlife Warriors’ to involve others to protect the endangered wildlife.

In 2006, Steve met with an unfortunate death when he was pierced in the chest by a Stingray barb while filming in the Great Barrier Reef in Australia. His legacy, however, is still being carried forward by his family. Robert, in particular, is mirror image of his father and carrying forward his work as a nature photographer as well as a conservationist. 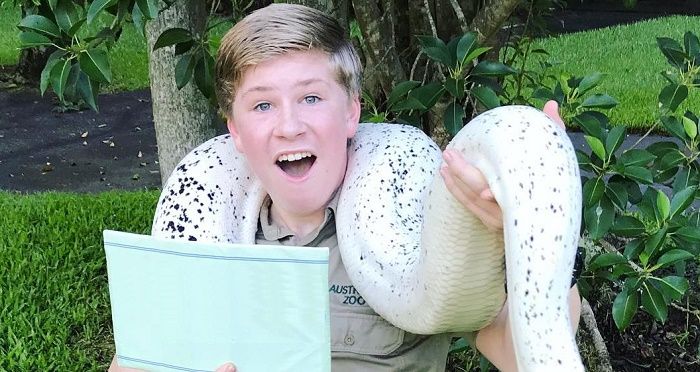 Robert Irwin grew up in the Australia Zoo with animals all round. His earliest encounter with wildlife happened when he was just a month old. His father, Steve, carried him in his arms and went inside a crocodile enclosure during a show in the Australia Zoo. There, in front of numerous spectators and media, he hand fed a chicken carcass to the hungry crocodile. The incident created a big controversy and Steve was severely criticized for carrying his infant son so close to the crocodile. This forced Queensland government to prohibit the entry of children as well unqualified personnel in a crocodile enclosure.

Robert had a rather unusual schooling. He, along with his sister Bindi, was educated at home. Since travelling around the world was an integral part of their early lives too, this arrangement perfectly suited them. The siblings had separate tutors at home and one while they were travelling.

In 2019 Robert graduated from high school, full two years ahead of his peers and also completed two TAFE certificates. 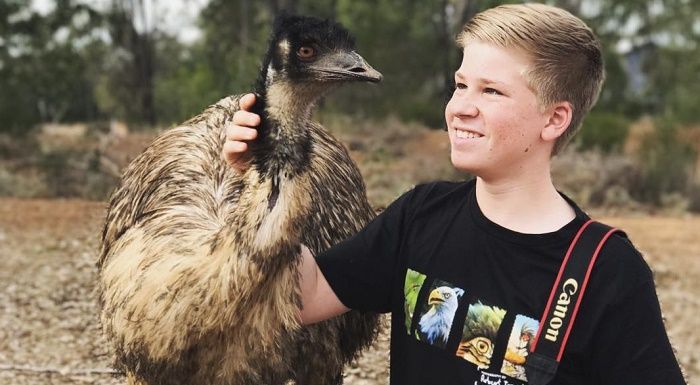 Robert Irwin gets his love for photography from his father who always carried his camera while travelling. Today, Robert is an acclaimed photographer who travels around the world to capture stunning images of nature and wildlife. His work has been featured in reputed publication and galleries around the world. He believes that photography is an excellent way to inspire people and motivate them to love and protect nature and wildlife.

Robert has been recognised a number of times for his work in photography. To begin with, he was a junior runner up ‘Australian Geographic Nature Photographer of the Year’ in 2016 and emerged as a finalist in the next three successive years. 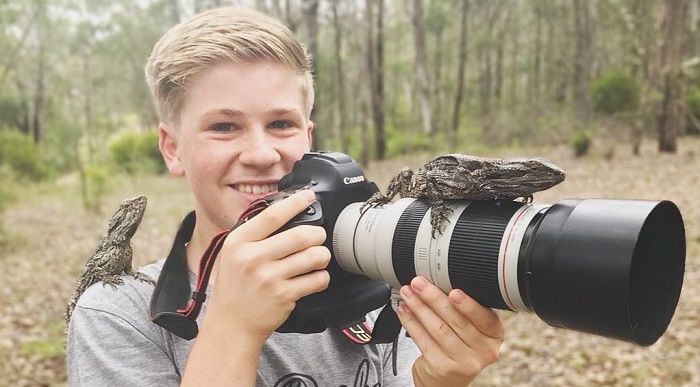 He was honoured in the youth category of the ‘Nature’s Best Windland Smith Rice International Photography Award’ for two consecutive years in 2018 and 2019.

In 2018, he was highly commended in the youth category of the Britain’s prestigious ‘Wildlife Photographer of the Year’.

Robert Irwin began his career in 2009 by doing a cameo appearance in a film, ‘Free Willy: Escape from Pirate’s Cove’. In 2012, he worked on the television series ‘Steve Irwin’s Wildlife Warriors’ together with his mother and sister. The show which was a tribute to Steve Irwin won him a nomination of Most Popular New Male Talent in the Logie Awards.

In 2014-15, he co-hosted Discovery Kids series ‘Wild But True’ along with Isabel Yamazaki. The show was an excellent biomimicry series that dealt with the impact of nature and wildlife on the development of technology and human lives. The show gained a nomination in the International Emmy Kids Award in 2016.

There’s never been a better time to visit @queensland and @australia! We need your support more than ever and there’s so much of this big beautiful country to explore. Queenslanders, I encourage you to holiday at home… and for all of you wanting to visit Australia from overseas, we can’t wait to see you soon! 🐨 #VisitSunshineCoast #ThisIsQueensland #SeeAustralia

In 2015, he appeared in an episode of ‘Ten Deadliest Snakes’, a British Wildlife series presented by Nigel Marvin. In the series, Nigel travelled to different countries of the world to know about the top ten deadliest snakes of the region. Robert appeared as guest for the episode on Australia’s venomous snakes.

In 2017, Robert made his first appearance on the The Tonight Show with Jimmy Fallon. Since then he has made several appearances on the show with his favourite animals. Some of these animals include the baby African pygmy goat, baby black bears, baby kangaroo, a hundred year old snapping turtle, leopard cubs, baby ostrich, baby zebra, American alligator, dromedary camel and miniature horse.

In 2018, he appeared as a lead in Crikey! It’s the Irwins, a television series that followed the efforts and challenges of Terri, Bindi and Robert Irwin as they go about taking care of the animals in the Australia Zoo. In 2019, the second season of the series began. The series earned him a nomination in the 24th annual Critics’ Choice Awards.

More of His Works & Achievements

Very early in his career, he provided illustrations for a book series, ‘Robert Irwin – Dinosaur Hunter’ which was published in 2013. 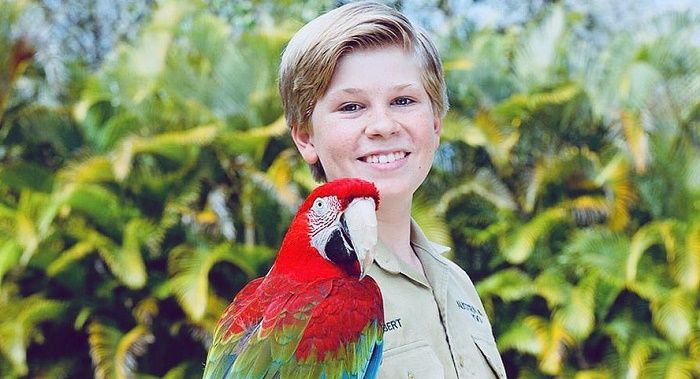 In 2017, he received ‘Luke Curnow Conservation Award’ presented by Save the Bilby Fund. In same year, he was selected as the Ambassador for ‘Scouts Australia’, one of the largest youth development organisations in Australia.His work involved inspiring younger generation to connect with nature and wildlife conservation.

In 2019, he featured in the ‘Time Magazine’s 100 Next List’ along with other emerging stars who have made a significant contribution in shaping the future of the field they work in. He also won the ‘Queensland Tourism Young Achiever Award’. The year also saw him kick-starting a campaign against a legislation that permits harvesting of wild crocodile eggs.