Famous As:- One of the Greatest Physicists of All Time, Best Known for Developing the Theory of Relativity 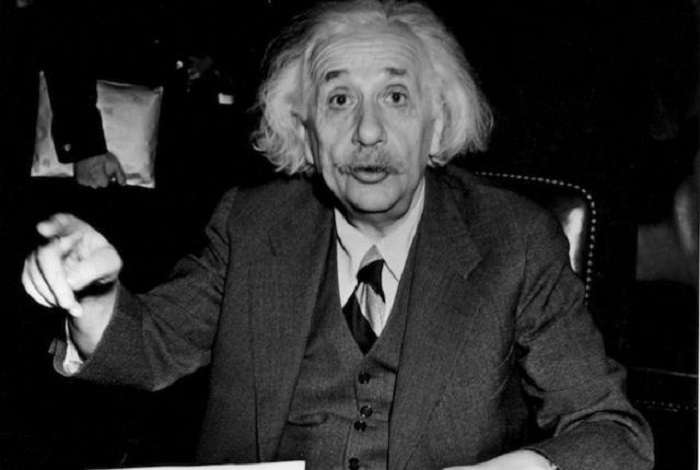 He is someone who doesn’t need and introduction whatsoever; his name is Albert Einstein. During his career-span as a scientist he played different other real-life characters. He was a poet, a fisherman, a violinist, a refined theorist, a philosopher and a brilliant scientist, of course.  ‘Theory of Relativity’, a much celebrated theory in the scientific realm was his brain-child which revolutionized the way we perceive universe and its phenomena. Despite all his cerebrated theories and inventive ideas there are many myths doing rounds in our society. We have enlisted 10 such myths about his life and tried busting them one by one with the help of an authentic monograph released lately called, An Einstein Encyclopedia.

1. THE MYTH: HE WASN’T A MERITORIOUS STUDENT.

As opposed to the popular belief, Einstein wasn’t a bad student at all. He was in fact, extremely brilliant right from his childhood but had a strong dislike for authoritarian teachers all his life. For instance, he flung a chair on his tutor at the age of 5 because he couldn’t understand his style of teaching. “Yesterday Albert received his grades, he was again number one, and his report card was brilliant,” his mom once said in a letter to his sister. According to the records from Swiss Archives, he was remarkably talented in Mathematics, Algebra and Physics.

While at university, he was far more interested in physics than mathematics and so paid scant regard to the latter. He didn’t bother to attend math classes much as he felt he needed only elementary knowledge and this is where the myth may have started. One of the math professors, Herman Minkowski, called him a “lazy dog” due to his lack of interest in the subject. When he took the entrance exam to the Swiss Polytechnic in Zurich, he failed in Geography and History and understandably so. His academic records may have also been misled by a change in the grading system at his school in Aargau, Switzerland, notes Dr. Stachel.

2. THE MYTH: HE WAS DIAGNOSED WITH ASPERGER’S SYNDROME.

As a child, Einstein was a loner and often used to talk to himself, which made him repeat a sentence endlessly. This led many to believe that he had autism or Asperger Syndrome to be exact. He liked delving deep into the various ideas he harbored, thus paying little or no attention to other things like eating and social communication, giving others an impression that he had some disorder. Going by the accounts of his friends, he never had any difficulty communicating with anyone but on the contrary, was really articulate and outspoken.

He is believed to have had intimate relationships with quite a few people and none of whom could recount anything unusual in his speech. According to his physician friends, Einstein never showed any signs that hinted towards any possible speech anomaly or lack in social skills.

3. THE MYTH: HE DECIDED TO TURN INTO A VEGETARIAN.

Einstein didn’t himself choose to be a vegan but was rather advised by the doctors not to consume meat due to his deteriorating digestive capacities. In the later part of his life he had developed many stomach ailments which prevented him from leading a normal life. As a result, he switched over to a vegetarian diet but many people believed that he consciously chose to do so. However, he is known to have admitted in a letter to one of his friends about him feeling guilty about eating meat. He did agree to the argument of vegetarianism but health implications were the chief factors he took to vegan ways of life towards the fag-end of his life.

4. THE MYTH: THE ATOM BOMB CAME TO EXIST BECAUSE OF EINSTEIN.

This one has been found to be doing rounds even among intellectual circles across the world and needs to be dispelled at once. Einstein did not directly participate in the making of the Atom Bomb. The ‘Theory of Relativity’ that he propounded revealed that even a small amount of matter contains a huge amount of energy in its core which, if harnessed, could solve all power issues. However the letter that he signed to President Franklin Roosevelt was written urging him to fast-forward the building up of nuclear-capacity in order to stop Germany dead in its tracks. He was an ultimate pacifist and never wanted his theory to be utilized for any destructive purpose. He even wrote to Neils Bohr saying, “”when the war is over, then there will be in all countries a pursuit of secret war preparations with technological means which will lead inevitably to preventative wars and to destruction even more terrible than the present destruction of life.” 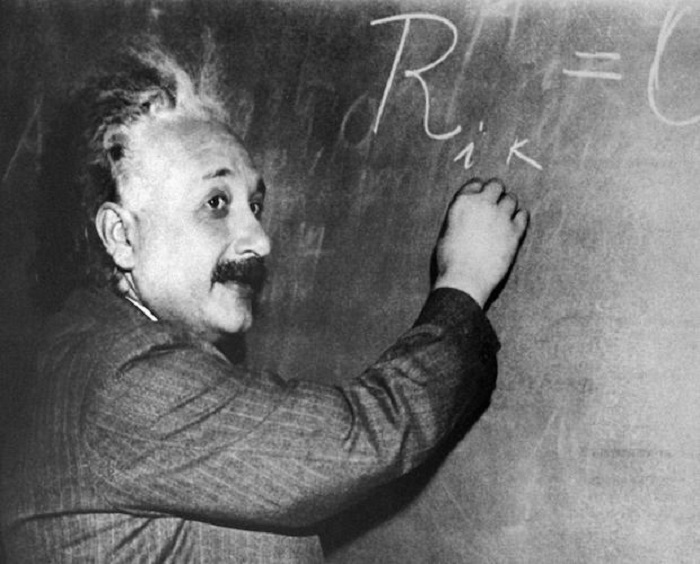 There is a persistent belief among people that he was left-handed but since there hasn’t been any convincing evidence to back the claim, it is aptly called a myth. He held violin in his right hand and even wrote with his right hand which flatly goes to show that he was right-handed. The autopsy report showed a symmetry between the two hemispheres rather than a left-sided dominance which is peculiar to right-handed people or vice versa.  In none of his pictures does anyone find him using his left hand not even in this one.

6. THE MYTH: HIS FIRST WIFE WAS GIVEN CREDIT FOR MANY OF HIS DISCOVERIES. 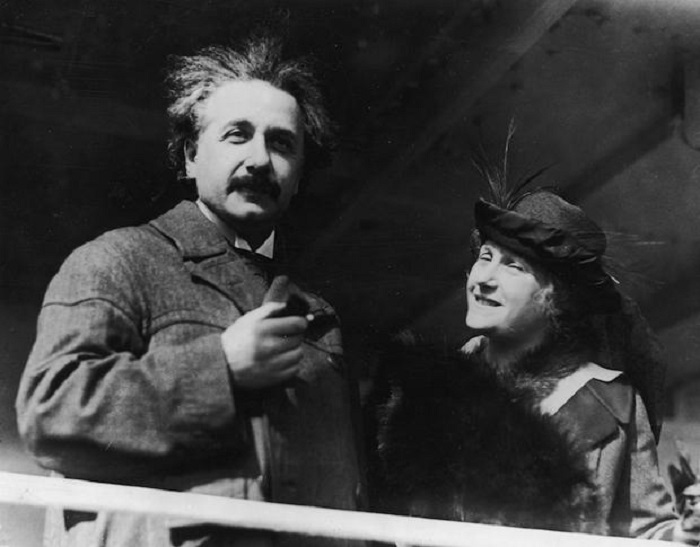 This myth was floated by one of the articles written by American Evan Walker Harris which suggested that Mileva Marić, Einstein’s first wife, was an unacknowledged co-author of his paper on relativity. This idea generated a lot of controversy back then but was rejected by many physicists and historians of science soon after. The myth chiefly seems to be based on a letter that he sent to his wife Maric which had the phrase, “bringing our work on relative motion to a successful conclusion!” However, what takes the wind out of its sails is the fact that there was no letter from Maric’s end that talked about ideas and besides, she couldn’t even pass her final examinations.

This myth has surfaced mostly because ‘the theory of relativity’ over-shadowed all his other inventive ideas. We hardly realize it while we encounter Einstein in different fields of our daily life. It was he whose ideas were employed in inventing the GPS, the scanner used at cash registers, digital camera etc. He might not have written essays for practical use or personal profit but his abstract ideas on light, space and time have led to many technological inventions which look quite normal today.

His ideas had significant impact on the invention of televisions that make use of ‘special theory of relativity’ to produce the sharp images that we see today.

8. THE MYTH: HE WAS APOLITICAL.

Quite contrary to this particular myth, he was one of the most outspoken ones among the science fraternity. The offer from Israeli parliament for the position of the president bears testimony to the fact that he had a great sense of statesmanship. He was a remarkably prolific political writer, someone who took bold and often unpopular stands on Nationalism, McCarthyism, Militarism, Anti-Semitism, Racism etc. he was deeply disturbed by America’s blatant misuse of the nuclear weapons and even wrote to Japanese pacifists post the bombings of Hiroshima and Nagasaki explaining to them his stand on the matter. He took up the cause of Afro-Americans and openly lauded their efforts made to enrich the American Culture.

The ace scientist lived for another 30 years after 1925 and kept contributing towards the scientific advancements until his last breath. Some of his important discoveries came out in the last 30 years of his life such as ‘unified field theory’ that elaborated on electromagnetism, gravitation and quantum mechanics. Even though the theories post 1925 were not as revolutionary as the ones before that period but they did help in establishing a ground for further enquiry by the later physicists. He “might as well have gone fishing” said his biographer, Abraham Pais who thought Einstein was not as active in the research field as before.

10. THE MYTH: HE WAS ONE OF THE FEW PEOPLE WHO COMPREHENDED THE THEORY OF RELATIVITY.

People questioned his theory of relativity saying that it was too obscure and could be understood by only a selected few. Irked at this response he once said, “It is absurd. Anyone who has had sufficient training in science can readily understand the theory. There is nothing amazing or mysterious about it. It is very simple to minds trained along that line, and there are many such in the United States.” The theory, today, is widely understood by people in general and further researches on it have gone on to testify in favor of Einstein besides refuting the claim of obscurity.