Athens was faced with severe economic turmoil after the Decelean or the Ionian War which concluded in 404 B.C. wherein the Spartans thwarted the Athenians. By this time Socrates had earned quite a reputation among the elite in Athens. He questioned those in authority and the beliefs that had been propagated through the centuries. His inquiring mind was instrumental in forming the basis of Western philosophy. 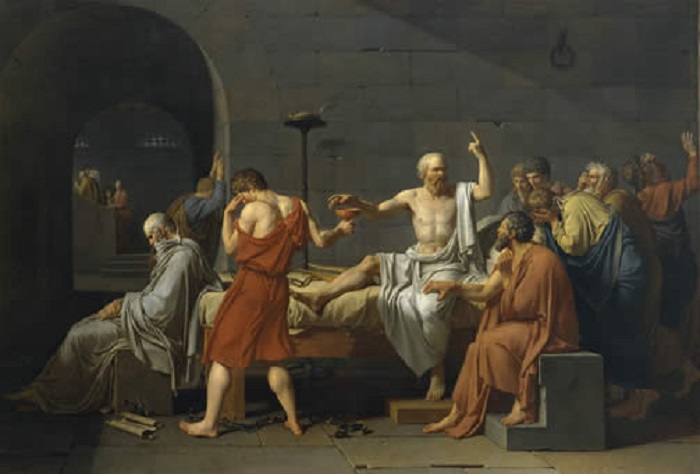 The failures of the democratic government had sowed the seeds of doubts in the minds of the common man, who began pondering if such a political ideology was befitting for the country. Entire Greece had to bear the brunt of the Peloponnesian War but Athens was struggling the most. It was never able to restore its fallen pride and prosperity after accepting the subjugation by Sparta.

Socrates seemed to be a convenient distraction from the impending economic mess. His growing stature and his audacious nature brewed dissent among many of the oligarchs. And his trial was probably a frail attempt at diverting the attention of masses from the political scenario.

Despite being counseled otherwise, Socrates decided to stand up against the prevailing norms of politics and society. He believed, as a loyal citizen of Athens, it was his duty to pinpoint the shortcomings in their way of life, even if it questioned the beliefs that have been adhered to for centuries. None of Socrates’ writings have prevailed and it was by the works of his student Plato that further generations came to know of his philosophical ideas. It was in one of Plato’s works on Socrates that he describes the latter as a ‘gadfly’ of Athens (A gadfly is a person who upsets the status quo by posing upsetting or novel questions, or just being an irritant). Despite his noble intentions, Socrates might have rubbed off some members of the nobility on the wrong side, thus eventually leading to his execution.

Plato’s ‘Apology’ mentions that Socrates’ life as a gadfly began when Chaerephon, one of the latter’s close friend and confidante posed a question to the oracle at Delphi, who was wiser than Socrates in entire Athens. The oracle then pronounced that none was wiser than the classical Greek philosopher.

Confounded by the absurdity of the reply, Socrates decided to prove the oracle wrong and ventured on the quest to find out the wisest man in the entire land. He met several statesmen, poets, and artisans in his pursuit but the only truth he realized was that all these proclaimed intellectuals actually possessed no intelligence. Socrates finally came to the conclusion that the oracle’s prediction had been right. As he was the only one who was aware of his lack of wisdom, he was indeed the wisest among all men who were intoxicated by a false sense of intelligence.

The public humiliation caused to the wise people of Athens whom Socrates had interviewed during his quest was the reason he was put to trial. The intellectuals accused him of wrong doing and impiety. Despite his extensive defense, the dikastes pronounced him guilty on both counts; they justified their decision saying he was corrupting the young minds and had no regard for the gods of the state.

When given the chance to propose his own punishment, Socrates suggested “a wage paid by the government and free dinners for the rest of his life instead, to finance the time he spends as Athens’ benefactor.” The archon was surprised by his audacity but eventually sentenced him to death by drinking poison.

Socrates who strongly believed in the righteousness of his actions, continued to defend himself even in his death. Despite being presented an opportunity to escape the prison, the sophist declined to flee. Also when the dikastes gave him the option to pay a fine and avoid execution, Socrates denied saying he had done nothing wrong.

Xenophon’s account states that Socrates believed it was the right time for him to die and “he was better off dead”.

The reasons he gave in support of his decisions were many:

1. He did not want to create an impression that he was afraid of death.

2. He did not want to flee as he would encounter the same fate in any other country.

3. He refused to shame the Athenian law even in his death and said that if he fled it would be a violation of the ‘social contract’ with the state.

The brave and selfless man laid down his life for his country and gladly accepted the hemlock, a toxic infusion, which he was supposed to ingest. He showed no signs of fear and consumed the contents of the vial all at once. Plato’s ‘Phaedo’ is among one of his most renowned dialogues on Socrates. The dialogue describes the death of the legendary philosopher:

“After drinking the poison, he was instructed to walk around until his legs felt numb. After he lay down, the man laid his hands on him and after a while examined his feet and legs, then pinched his foot hard and asked if he felt it. He said ‘No’; then after that, his thighs; and passing upwards in this way he showed us that he was growing cold and rigid. And then again he touched him and said that when it reached his heart, he would be gone. The chill had now reached the region about the groin, and uncovering his face, which had been covered, he said — and these were his last words — “Crito, we owe a rooster to Asclepius. Please, don’t forget to pay the debt.”  ‘That,’ said Crito, ‘shall be done; but see if you have anything else to say.’ To this question he made no reply, but after a little while he moved; the attendant uncovered him; his eyes were fixed. And Crito when he saw it, closed his mouth and eyes.”

There have been several interpretations of the last words uttered by Socrates. While some believe Asclepius, the Greek god of curing illness bestowed upon him the freedom or cure from an obsolete body in the form of death, others are of the opinion that Socrates voluntarily offered himself as a sacrifice to Asclepius in exchange for curing the misfortunes of Athens.