Surely the first image that pops into one’s head when the word Fascism is rung is that of Benito Mussolini. Mussolini was the founder of the National Fascist Party, an inevitable demon child fathered by World War I. The word ‘Fascism’ in Italian by itself is not specific, just associative—fascio meaning a bunch or group. Giuseppe Garibaldi, who is considered one of the fathers of Italian political history, was the first to form a ‘Fascio party’, a leftist wing, in Bologna in 1871, which mainly dealt with socialism. It’s probably from here that we can trace the roots of Fascism, an inspiration sowed into the leaders that followed. 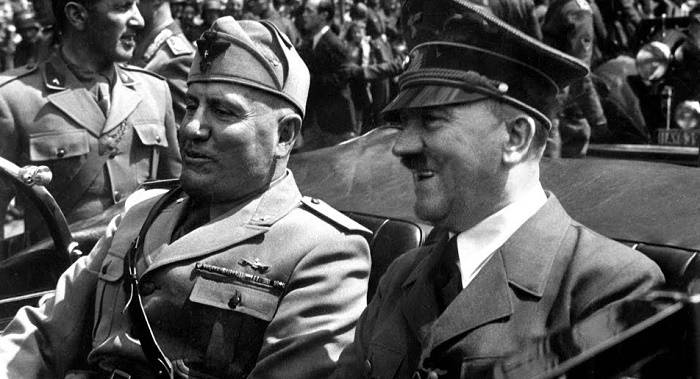 In 1914, dissident Benito Mussolini was ousted from the Italian Socialist Party after opposing their neutrality during the World War I. He went on to form his party ‘Fascio di Azione Rivoluzionaria’ and by the end of the year allied with the similarly called ‘Fasci party’, which comprised of pro-war ‘Syndicalists’ who considered themselves left wing revolutionaries.

There are several reasons as to why the fascist party grew to become an authoritarian government but the two main inspirations were Gabriele D’Annunzio and Filippo Tommaso Emilio Marinett, Italian writers, poets, etc. They, motivated by each other’s literary works promoted the decadence and the futuristic movements that emphasized on the importance of speed, technology, youth and violence. It was the marriage of perspectives of these two influential writers that saw the rise of what the world would soon antagonize—the Fascist party. It was their love for violence, and their belief that only ‘heroic’ men who lacked compassion had the right to rule that bonded D’Annunzio, Marinett and the resolute journalist Mussolini, a link that would form the trinity of the Fascist party.

In 1908, the earthquake of Messina laid bare the grave poverty in the south of Italy. It was this situation that impelled Italian nationalist writer Corradini to coin Italy a ‘proletarian’ nation at that time, a situation that could only be solved by their ambition for irredentism, prevalent even amongst members of the Nationalist party. The situation the country faced bent in favor of what was to come—fascism—as the youth of the country day was were inspired to indulge in violence and prevail heroically in war. For the youth at that time and situation, war was the only answer to their predicaments. Corradini further added that the men from Tripoli could live happily. However, what barred them from doing so was the barbaric nature of the Turks that enforced emigration and stopped them from reclaiming their Promise Land. As soon as the conquest of Libya was launched by the Italians for colonization, D’Annunzio furthermore instigated the Italian public with his work ‘Canzoni delle gesta d’oltre mare’, which praised the conquest and the use of violence to claim authority.

The Balkan wars in 1912 and 1913 publicized the collapse of the Turkish Empire and this instilled avarice among the Italians as it was their chance to claim territory while the Balkan nations were weakened. This questioned the inhabitance of the Italians in the Adriatic, mainly Austria-Hungary, in Zara, Fiume, Pola, Trent and Trieste and the right to claim it as their own. The pressure of the German Nationalists at that time on the Italian locals in Trent was evident. While the Italians protested the lack of Italian Universities in Austria, their Chief of Staff General Conrad von Hotzendorf was determined to take preventive steps against the threat. He decided to tie their hands as he even contemplated attacking Italy during the 1908 Messina earthquake while their army was busy with relief work. He found it convenient to defeat them.

What then rubbed salt on the wounds of the Italians was that the locals of Trieste, predominantly Jewish, were more in favor of being part of Austria-Hungary rather than Italy, citing business opportunities. The galling prospect was that the locals of Trieste, Istria and Dalmatia were more pro Slav Nationalists than Italian. Though these regions were once Italianized with the culture embedded in them, post the 1900’s this connection slowly withered away to their south Slav loyalty which according to the Italians was ethically unjust.

The introduction of the Universal Suffrage in Austria in 1907 proved that Istria and Dalmatia displayed less Italian and more Slav nationalist feeling. Coinciding with the suffrage, D’Annunzio incited the vulnerable youth with his writings of the ‘Venetian Empire’ and filled them with the sentiment of capturing all the regions that were once under Venice to Italy. This instigated a bitter racial feud with its purpose being Dalmatia.

In repulsion to the Italian Prime Minster Salandra’s neutrality, the Mazzinian Republicans, formed by Italian politician and journalist, Giuseppe Mazzini, along with 4000 followers of Garibaldi’s grandson marched to France’s aide. As a result of their demonstrations, Marinetti, futurist painter Boccioni and others were arrested. From prison they unanimously launched the ‘Sintesi futurista della Guerra’- a futurist campaign.

After being expelled by the Italian Socialist Party, Benito Mussolini started his own newspaper journal called Popolo d’Italia. The newspaper popularized the views of all interventionists, and Marinetti, once he returned from jail, joined hands with Mussolini to achieve their dream of the unification of Italy under Fascism. It was in the spring of 1915, when D’Annunzio returned from France to Italy, a shift he made to nullify his debts. This was regarded as his return from exile.

Up on arrival at Quarto on May 5, 1915, he incited young insubordinates, and then travelled to Italy to be welcomed as a hero and unite the youth in violence. On 12th May, from his balcony he berated the present government and harangued them into unison. Five days later, D’Annunzio kissed the sword of the Garibaldian hero, Nino Bixio, to symbolize the birth of the futuristic movement on the Capitol and a week later, war was declared on Austria-Hungary.

Marinetti stepped in at once and was severely wounded in one such battle. In 1916, painter Boccioni was killed while D’Annunzio matched his rhetoric by piloting a plane and dropping parchments of propaganda over Trieste and Trent in September. He lost an eye after a forced landing and was bedridden for a month. Meanwhile Mussolini too involved himself in the rebellion and was wounded in one case. With an impact that was nothing short of spectacular, he returned to his newspaper in 1917 to spearhead the spread of propaganda. His time spent in trench warfare made him more nationalistic than he had ever been.

Following the defeat of Caporetto in November 1917, special troops called ‘Arditi’ were formed, majorly compromising youth of the Universities. With the carious state of the Parliament laid bare, greater violence according to them was the answer. They wore black shirts and special training was given to a select few competent enough to cause mass destruction. The indignation caused by the Peace treaty dismayed them further as according to it Trieste and Istria would be handed to Italy but not Dalmatia. It also seemed absurd to them that Fiume (now Rijeka) was not added to Istria considering that it had predominantly Italian population. Convinced that it was a conspiracy against them by the French, D’Annunzio commanded 300-Arditi soldiers and took possession of Fiume in September 1919.

Hailed for his fervor against the Slavs as well as subsequent victory, D’Annunzio introduced the syndicalist system in Fiume, proposed to march to Rome with his Arditi and free the city from the liberals. His proposition was applauded by these apostles of violence.

Six months before that, Mussolini and Marinetti, who were residing by the Milanese headquarters of the Arditi, founded the Fasci Italiani di Combattimento, a leftist but nationalist party. However, in spite of their popularity, they failed to win a seat in the Italian Chamber in the following elections. On the other hand their opponents, the Socialist party and the new ‘Catholic party of the Popolari’ dominated proceedings by winning most of the 508 existing seats. That being said, even the members of the Socialist party were in an extremist mood, lured by the Fascist exhibition of violence and the impact it caused on the minds of citizens.

Along with Sforza as foreign minister, Giolitti came back to power in 1920 and by the end of the very same year, D’Annunzio was pushed out of Fiume which left Dalmatia under the complete control of Yugoslavs.

Time was changing but Giolitti himself wasn’t evolving in order to control situations. He often ignored oppositions until they were left to look like fools. However, with severe famine and economic downfall, even the peasants took to arms and resorted to violence. Revolutionary socialist leaders held large scale strikes as well agrarian protests which in most cases left tons of food to rot, invariably leaving the citizens famished. While the frustration and irritation of the people against their rule reached a boiling point, Mussolini used this to gain advantage in his depravity. He took full praise for D’Annunzio chaotic battle at Fiume and was even backed by the strike breakers.

Over time, with his eyes on being an authoritarian leader, Mussolini was less principled and more ambitious in his ways. Marinetti, some syndicalist and futurists parted ways with Mussolini over his change of approach and his placatory efforts shown towards the church. He went a step ahead of D’Annunzio and Marinetti and joined Giolitti’s national bloc. Under Giolitti, Mussolini’s Fascists party was given the ‘go-ahead’ to terrorize certain regions and gain 35 seats in the Italian Chamber. Later on, Mussolini abandoned violence for a while and issued peace with the trade unions through the ‘pact of pacification’. In 1921, he transformed the Fasci party into a political one and then ingeniously avoided civil war by accepting the Monarchy in 1922. This prompted the king to call off the state siege and in turn brought in respectability for Mussolini. Despite what his party now stood for, Mussolini was asked by the King to preside over the coalition government.

The king refused to liquidate the chamber upon appointing Mussolini as Prime Minister and this gave him ample time to pass the ‘Acerbo electoral Law’. The new law guaranteed 2/3rd majority of the seats to the biggest party and abolished proportional representations. The new election dates were fixed for April 1924.

During the election campaign, the Fascists callously beat up their opponents—the Socialists and the Catholic Popolari. Despite the intimidation of the Fascists, one third of the voters polled against them. Giacomo Matteotti, a socialist who was elected, held a conference to discuss the extremist’s advances made by the Fascist party during the campaign. He also called for the electoral result to stand invalid as with this, he also had proof of corruption against the Fascist police authorities.

Mussolini blatantly ordered for the life of his opponents to be made hell and on June 10, 1924, a group of ex- squadristi (Fascist youth fighters) attacked Matteotti and killed him when he tried to resist. The murder sent ripples through the Italian population, and finally through the obscurity, Fascism was finally known for what it really was by all. The king did contemplate dismissing Mussolini, but his opponent’s woeful mistake of exiting the chamber gave Mussolini an opportunity to seize complete control. The king rebuked them for this move as well as for undermining the power of his rule and the government.

With the offers made by Mussolini to the trade unions, and the industrialist’s confidence in the former’s extremist approach towards governing, the fascist leader played his trump card. This instantly instilled fear into any dwindling opponent at that time. Benito Mussolini publicly took responsibility for the murder of Giacomo Matteotti.

On Jan 3rd, 1925, Mussolini announced in the chamber that he was taking all responsibility for what happened and that from then on the Government of Italy would be under the complete control of the Fascist Party, making it an all-Fascist Government.