The Forbes list of ‘The Richest People if America’ stirred the media when the name Robert F. Smith appeared on the list. Until then Smith was not much known to the masses but his name as the 268th richest American has brought him into limelight. He appeared on the cover of Forbes magazine creating a buzz in the business arena as with a net worth of $2.5 billion, he is the richest African-American man.

Robert Smith can be better described as the mind behind the investment firm ‘Vista Equity Partners’. He is the co- founder and CEO of the venture, chairing the same. Born on 1st December, 1962, in Denver, Colorado to parents who were both school teachers, Smith was brought up in a middle-class African-American environment. On 28th August, 1963, when revolutionist Martin Luther King Jr. delivered his historical speech ‘I Have a Dream’, little Robert was one among the many spectators, and maybe lying in his mother’s arms, Smith too built his dream.

When he was still a student at Denver’s East High School, Smith showed special interest in Computer Science and wanted to opt for an internship at the ‘Bell Labs’. The ‘Bells Labs’ belongs to the French telecommunication company ‘Alcatel-Lucent’ and has its origin in the 19th century ‘Volta Laboratory and Bureau’ established by Alexander Graham Bell.

The fact that the company did not take school students as intern, did not dishearten him and he kept trying till he succeeded. He repeatedly called the HR at the company until things turned in his favor. It so happened that an MIT student who applied for the summer internship did not turn up and eventually, Smith was called to take up the seat. During the internship he formulated a test which would assess the quality of semiconductors.

He joined the ‘Cornell University’ and graduated with a B. S. in Chemical Engineering. While at the university, he spent his vacations at the ‘Bell Labs’ as an intern. The business magnate also worked with the food manufacturing company ‘Kraft Foods’ for a brief period and then earned an MBA degree from the ‘Columbia University’. After completing his education he got recruited at ‘Goldman Sachs’ where he worked as co-head of enterprise systems and storage investment from 1994 to 2000. He operated in New York and the Silicon Valley and his work mostly concentrated on merger and acquisition (M&A), where he advised tech M&A deals worth $50 billion to business empires such as Microsoft, Apple, Texas Instruments, Yahoo and eBay.

In 2000, he parted with ‘Goldman Sachs and laid the foundation of ‘Vista Equity Partners’ along with co-founder Brian Sheth, who is now the president of the venture. In the next 15 years Vista grew immensely becoming a billion dollar company. Today the company has more than $14 billion assets with its areas of investment being enterprise application software (EAS) as well as other technology and data based businesses. The company offices are located in San Francisco, Austin, Texas, California and Chicago, Illinois.

The firm has given overwhelming returns to its investors ever since its inception and the average annual rate of return has been 31%. The success mantra was simple but unique — Smith never looked for renowned companies to invest, rather he chose enterprises which were far from the vicinity of limelight. While most investment firms hankered after big names in the market, he preferred to plough capital into the ones which will not grab the interest of many.

In 2001, Vista invested in the software company ‘BigMachines’ and continued to do so until it was acquired by ‘Oracle Corporation’. The next deal was with the storage vendor ‘DataCore Software’. The equity firm acquired companies such as ‘SumTotal Systems’ and ‘MicroEdge’ with $160 million and $30 million respectively in 2009. In 2014, Vista spent a whopping 4.3 billion and took over the ‘Tibco Software. The following year, it brought into acquisition some of the largest ‘Student Information System’ (SIS) assets which included the ‘PowerSchool’ SIS assisting around 15 million students over about 73 countries. During the same time the company also took over the advertising and software company ‘Mediaocean’.

With these business strategies he led Vista to stand at a value of around $4.3 billion and it is growing each day, wherein Smith has the highest amount of stakes.

While this business tycoon maintains a low profile in trade dealings, it is the other way round when his personal life comes into consideration. This was proved when he married glamourous Playboy model and TV personality Hope Dworaczyk. The wedding was conducted with pomp and show in Italy. Among the many celebrities who graced the event were Brian McKnight, John Legend and Seal. The grand hotel ‘Villa Cimbrone’ was reserved for the occasion and when the newly wed performed their first dance, a customized light displayed “Mr. and Mrs. Smith”.

Robert and Hope had been blessed with a son on 19th December, 2014 who they named Hendrix Robert Smith, and the couple is expecting another child soon. Smith is also father to three children from his previous marriage. 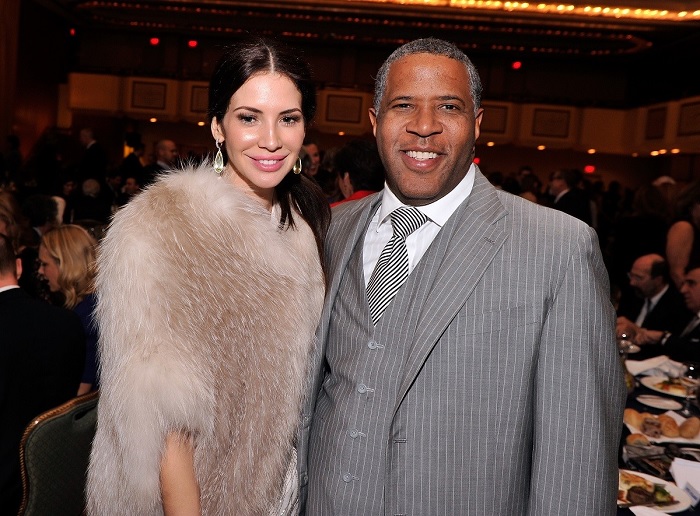 Apart from the soaring career and affectionate personal life, this billionaire is a philanthrope and his kind gestures have been recognized by many making him a recipient of ‘Humanitarian of the Year Award’ given by the ‘Robert Toigo Foundation’ and the ‘Reginald F. Lewis Achievement Award’. He also received the ‘Ripple of Hope Award’ from the ‘Robert F. Kennedy Human Rights’. He is keenly interested in fly fishing technique and even practices it.

This entrepreneur is a Member of the ‘Cornell Engineering College Council’, engaged with the Board of Overseers of ‘Columbia Business School’, a trustee of the ‘Boys and Girls Clubs of San Francisco’, a board member of the ‘Carnegie Hall’ and chairs the ‘Robert F. Kennedy Human Rights’.

The richest African-American man, as we all know him now, has been instrumental in the creation of ‘Project Realize’. This project is meant to give market exposure to businesses which have the capability to make a difference to American economy as a whole. The tried and tested strategies which helped Vista reach the pinnacle of equity funds when applied to these new businesses will prove beneficial. This is the reason behind the initiative.

He has been bestowed with an honorary Doctorate of International Affairs by the ‘American University’s School of International Service’. While delivering a speech to the students there, he was quoted saying, “We are only bound by the limits of our own conviction. We can transcend the script of a pre-defined story, and pave the way for the future that we design. We just need to tap that power, that conviction, that determination within us.” True! It is his unrelenting conviction that has brought him so far and this will also take him a long way in the near future. This conviction and earnest desire earned him the internship at ‘Bell Labs’ years ago and even after decades, Smith’s determination seems unaltered.