Mychaelade, real name Mychael, is a Brazil-born American social media star who has a huge following on TikTok. He regularly posts funny videos and pranks on his TikTok accounts with his friends, who are also prominent stars on the platform. Furthermore, he is also popular on Instagram and on his Instagram account he can often be seen in fake images with well-known celebrities.

Mychaelade has collaborated with several other TikTok stars

Mychaelade is friends with many popular social media stars such as Cash Baker, Chase Hudson, Josh Richards, Sam Hurley, Curtis Newbill, Sarah Graysun and Parker Pannell. He often collaborates with his friends for videos posted on his TikTok and Instagram profiles. Some of the TikTok stars to appear on his videos include Parker Pannell, Paige Mackenzie, Brooke Barry, Alex Ojeda, Geno Bonfiglio, Megan Rose Jordan, Robert Carroll, Sarati, Maverick Baker, Cash Baker, Lani Lynn Baker, and Sarah Graysun. In one of his TikTok videos, he could be seen dancing with Brooke Barry, Maverick Baker, Cash Baker and Lani Lynn Baker. 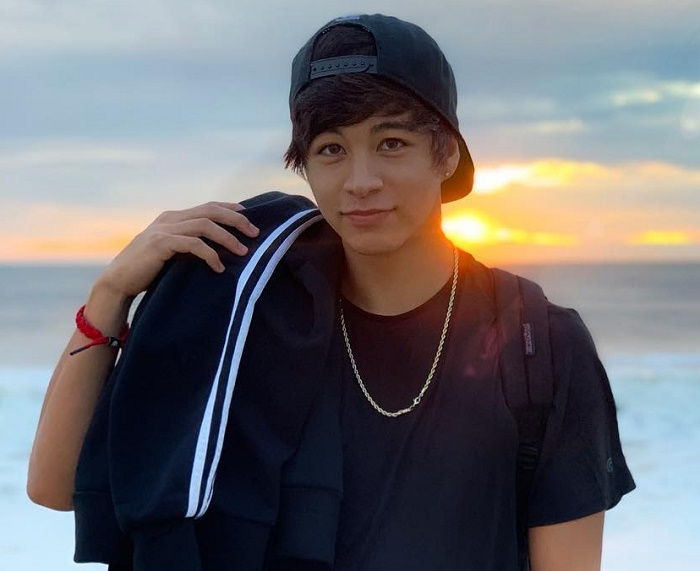 Mychaelade’s friend, YouTuber and TikTok star Parker Pannell, recently got viral fame for his videos and was featured on an article by ‘Business Insider’. A video posted on Pannell’s TikTok featuring Mychaelade and Paige Mackenzie became viral on the platform and earned over 830k likes. In the video captioned “never betray your friends”, Mychaelade can be seen by the swimming pool, approaching Mackenzie while ignoring Pannell, who then throws him in the pool as the former attempts to save his phone by throwing it back to his friend. The last part of the video is shown in slow motion capturing Pannell’s attempt to save his friend’s phone from dropping on the ground after throwing him in the pool. Mychaelade also posted the original video on his TikTok after posting a reversed version made by another TikTok user.

In July 2019, he was one of the big TikTok stars in attendance at the TikTok event during the annual VidCon party. The TikTok-sponsored party was by far one of the biggest event and even surpassed the YouTube-hosted event in terms of crowd-pulling. The event was so packed up that smaller creators had to wait in the line for hours before they could even get in. However, Mychaelade was one of the big influencers who catered to their fans’ demand of pictures and TikTok videos inside the event. Most young teenagers found the event more engaging than the one hosted by YouTube as they could hardly interact with the creators other than seeing them on stage.

He is a huge Ariana Grande fan

Mychaelade is a huge fan of American singer and actress Ariana Grande and often shares pictures of the celebrity on his social media profiles. However, he not only often claims to in a relationship with Ariana, but also has a bad reputation for posting photoshopped images of him with the singer in different poses. He regularly posts fake ‘proof’ of him dating Ariana on his Instagram and TikTok. In one video he showed as ‘proof ‘ to his fans, there were several chats on his phone screen from celebrities such as Selena Gomez, Taylor Swift, and Justin Bieber, apart from Ariana Grande. He also posts photoshopped images of himself with other celebrities on his Instagram.

Mychaelade was born in Brazil

He was born on November 30, 2001 in Brazil. However, his family later relocated to the United States. He currently lives with his family in Dover, New Jersey. He has a sister and a much younger brother who have occasionally appeared in some of his videos, and it is his mother who makes regular appearances on his posts on Instagram and TikTok.

He posed with his brother in e-boy style

Mychaelade posted a picture on his Instagram on March 24, 2019, in which he could be seen with his little brother, both dressed in e-boy style. He, however, had to bribe his brother with an ice-cream to convince him to wear and pose in the black clothes, chains and beanies, with black painted nails. His sister made a rare appearance in one of his TikTok videos in which he attempted to capture the reaction of his mother and his sister as he appeared before them with violet colored hair.

He previously loved to play football and volleyball

An athletic kid, Mychaelade grew up playing various sports and particularly loved to play soccer and volleyball. He was also a member of the soccer team in his school. He is still passionate about sports and often shares sports-related content on his social media accounts.

He has his own merchandise

Like most social media influencers of the time, Mychaelade also has merchandise to offer to his fans. He sells mostly T-shirts via the Redbubble website. The T-shirts are available with his name printed on the chest as ‘Mychaelade’, ‘Mychael’ or ‘Mychael 01’.