Kio Cyr is a popular French–Canadian ‘TikTok’ star, who is also a budding model and dancer. He now stays in the United States. Kio’s social-media journey began on ‘TikTok,’ but he has now gained fame on ‘Twitter’ and ‘Instagram,’ too. He has collaborated with many upcoming internet sensations. Kio has not revealed much about his family or relationships, and that proves he wishes to keep his personal life away from the limelight. Kio’s boyish charm and good looks have made him a favorite with teenage girls across the world. He already has his own line of merchandise. He is all set to perform as part of an interactive tour across 14 cities in 2020 and is sure to become a more successful influencer in the future.

Kio Cyr was born on September 5, 2000, in Vancouver, British Columbia, Canada. He currently lives in Olympia, Thurston County, Washington, United States. Not much is known about his parents. However, it is believed his father is of French descent, while his mother is Canadian. Kio thus claims to be French–Canadian, but it is also believed that he has Thai origins, as claimed on his ‘Instagram’ profile. He is thus Wasian, which means he is of mixed descent, with both Asian and White origins.

He attended the ‘Olympia High School’ and has played competitive soccer for his high-school team. 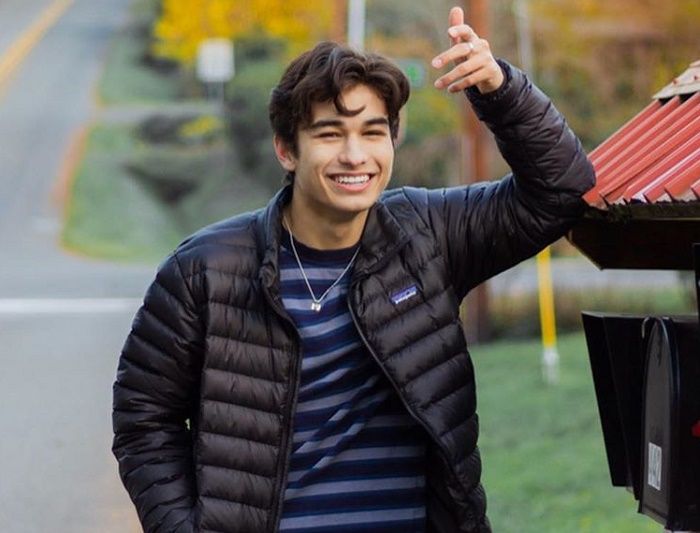 Kio Cyr began his social-media career with ‘TikTok’ (previously ‘musical.ly’) by uploading a clip of him dancing with his friends on the roof of his house. It was supposed to be a celebration of his high-school graduation, which was just a couple of weeks away. Since then, he has earned massive fame on the platform, with his entertaining lip-sync clips, transitions, point-of-view (POV) videos, challenges, and trends. His ‘TikTok’ account, “kiocyrrr,” now has 2.7 million followers and 58.4 million likes.

Kio Cyr is also popular on ‘Instagram.’ One of his first ‘Instagram’ posts was a Mother’s Day post, which proved that he shares a strong bond with his mother. His ‘Instagram’ profile, “kiocyr,” now hosts scores of his modeling photos. He has managed to gain over 539 thousand followers on the platform, over the years.

He is extremely popular with teenagers, especially girls. He has collaborated with ‘TikTok’ stars such as Charli D’Amelio and Griffin Johnson. He used the sound “Skyfall” by ‘TikTok’ star Vinnie Hacker for a clip titled “POV: You force me to tell you my secret.”

In September 2019, he stated that he was planning to launch a ‘YouTube’ channel and asked his ‘Twitter’ followers for their suggestions on the same.

In December the same year, a Los Angeles-based production and media company named ‘Juice Krate Media Group, LLC’ announced an event featuring internet stars. It was titled the ‘Juice Krate: ON TOUR.’ They stated that the event was supposed to consist of a series of live performances across 14 cities and was supposed to be held in February 2020. They also mentioned that the event was to be headlined by Kio Cyr and other popular social-media influencers, such as Jeremy Hutchins, Zachary Smith, Juwany Roman, and Terin Sottile.

Kio is also present on ‘Twitter,’ where his account, “kio_cyr,” has managed to garner more than 11 thousand followers.

@kiocyrrrPOV: We’re in the Deans office after I got into a fight with your boyfriend #foryou #pov♬ original sound – svpreme.matyy

No concrete information has been found about his love life. It is thus assumed that he is either single or likes to keep his personal life private.

Kio as a Person

Kio is known for his distinctive center-parted, wavy hair. His smile and his lean frame accentuate his “boy next door” image.

He is mostly seen wearing a silver locket and also sports bracelets on his right wrist.

He is fond of the social-media platform ‘Snapchat.’ He is fan of the beverage brand ‘Gatorade.’ He loves romantic comedies and his favorite movie is the 2018 film ‘A Star Is Born.’ He loves listening to music, especially the genres country, blues, and vibe rock.

He is often seen posing in his videos with a teddy bear named Koda. He has his own line of merchandise, which consists of T-shirts, hoodies, sweatshirts, and phone cases, which he sells in collaboration with the ‘TC Social Club.’ His merchandise also makes use of the image of ‘Koda.’

He once stated on ‘Twitter’ that an employee of a U.S. convenience store had screamed and asked him to go back to “his own country.” Kio had then joked about this racist slur, saying that going back to his country would only take him a few hours, as he was Canadian.

In another post on ‘Twitter,’ he said that he was alarmed at how people do not know how to accept a joke anymore and are constantly offended even at the slightest of things.