Toni Gabriel Mahfud is a German model, artist, photographer and social media influencer. Born on the 2nd of December 1994, Toni has been a creative at heart since he was a child. His parents are from Syria who have settled in Hamburg, where Toni and his twin brother Jan were born. Although twins, both brothers are temperamentally very different; Jan is shy and prefers to live a life of seclusion, whereas Toni is outgoing and enjoys the limelight. Toni has carved a niche for himself, slowly and steadily climbing the ladder of success, with his sheer hard-work and amazing creative flair.

Toni Mahfud is a wonderful artist, who has been drawing since he was 4-years-old, even though he does not have any formal art education. He apparently started drawing his favourite anime characters on plain paper and now sketches soul-stirring works of art that are so realistic you will think they are photographs! He usually works with pencils, colour pencils and watercolours in some of his works, creating celebrity portraits, and concept drawings. He has drawn Channing Tatum, Clara Delevingne, Adele, Kendall Jenner, Kim Kardashian, Paul Walker, Beyonce, and Rihanna to name a few. 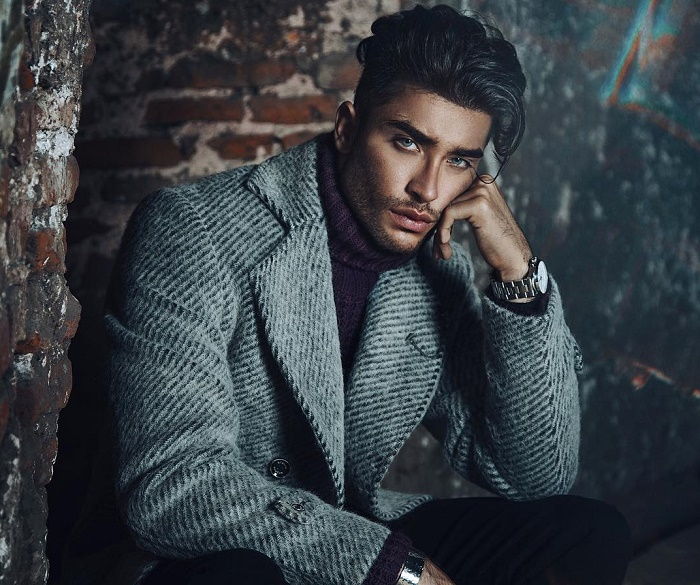 According to him, he is ‘obsessed with drawing hands’ and confesses how he used to avoid it when he was younger, because it was extremely difficult for him to get the realistic effect he wanted in his sketches. However, now he has a mastery over getting the fingers, the wrinkles, the nerves, everything on point.

He records the entire process while he is drawing and edits the videos to capture the development of the sketch from start till the completion in 3-5 minutes. He shares these videos on his YouTube channel and these are one of the major reasons behind his popularity. His video of painting Angelina Jolie in her Maleficent character has raked up 1.2 million views.

Toni Mahfud enjoys being behind the camera as much as he revels being in front of it! He is fond of travelling and is often seen capturing the essence of different countries, cultures, and the beauty of his surroundings with his camera during these escapades.

He is inspired by nature and being a creatively passionate individual, he experiments with his pictures by using photo editing digital software to create interesting compositions from his imagination. For example, in one of his posts on Instagram, he shared a picture where he is seen free falling in front of a majestic waterfall, with birds flying around him, and he captioned it as “Still dreaming about the things that could be?”

Toni has used multiple camera brands like Nikon, Cannon, Leica, and even shared a story holding his dad’s old Minolta camera, reminiscing about how his father used to click pictures of his brother and him when they were kids.

Toni Mahfud is one of Germany’s most popular social media influencers. He has 3.4 million followers on Instagram, and over 1 million fans on Facebook. Although most of his posts are pictures of himself, what makes it really interesting is the way he communicates with his followers and engages them with his content. Usually, a little philosophical, including a quaint quote and a heartfelt message for his fans, his captions accompanying the posts, are a joy to read. He is very active on these platforms and shares about his modelling work, his paintings and his travels.

He is roped in for doing sponsored posts by several companies in order to increase the visibility of their brand and promote any new product launches, few amongst them are car brand CUPRA, personal care & cosmetics brand SEPHORA, and apparel brand JOOP.

Toni Mahfud first got noticed because of his art, however, once he caught the attention of the internet, he started getting a lot of modelling offers. He worked with the IMG modelling agency and his career in advertising campaigns took off after that.

He is 6 feet 1 inches tall, has a chiselled good-looking face structure and an athletic fit body, which deems to be a perfect fit for many companies looking for a model. His hazel eyes are one of his most striking features, and their electric colour have made people question if they are real or does he use contact lenses. His boyish charm and an unabashed attitude makes him a perfect role model for the youth and therefore in huge demand with agencies who want to target their products to this age group.

Therefore, it is no surprise that in a short span of time he has worked with the who’s who of the fashion brands brands such as Tommy Hilfiger, Nike, Adidas, Daniel Wellington, AllSaints, G-Star Raw, Hugo Boss, Tigha, Gillette, OnePiece, and Filling Pieces.

Little is known about his relationships, as he refrains from talking about them. Although rumours are rife about him being with actress Ruhama Negassi, especially after they arrived together at the GQ Men of the Year Awards 2017.