American actor, singer, and social-media star Matt Sato is truly a revelation when it comes to talent. Matt Sato started his career as a competitive swimmer and was also part of the ‘Junior Olympics’ swim team. However, he soon realized that his true forté lay in the world of entertainment. He convinced his parents to let him study acting and also joined a dance class. He soon moved to Los Angeles with his parents and appeared in a few commercials. He made his breakthrough with the role of ‘Robby’ in the second season of the series ‘Chicken Girls’ in 2018. By then, he had also released his debut single, ‘I Know,’ on ‘TikTok’ and elsewhere. Matt has since then appeared in a host of films and series and has also released many tracks. He also has a few acting projects in the pipeline and shows enough promise to be a successful entertainer in the near future.

Matt Sato was born Matthew Satto, on April 19, 2001, in Hawaii, United States. He was raised along with his four siblings, three older brothers and an older sister, in Mililani, Hawaii.

Matt is a talented swimmer and has also been part of the ‘Junior Olympic’ swim team. 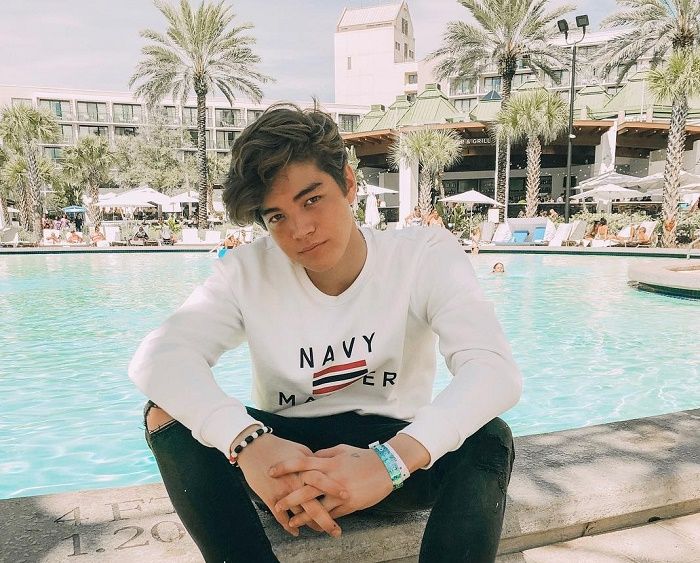 Career: From Swimming to Acting, Singing, and Social Media

Matt Sato began his career as a professional swimmer, participating in the ‘Junior Olympics’ competition. He then wished to step into the world of acting. Although his parents did not support his idea of a career shift, they allowed him to study acting and also to venture into singing.

Matt soon began his TV career with a guest role in an episode of the series ‘Hawaii Five-0’ in 2015, titled ‘Pono Kaulike.’ In 2017, his family moved to California with him, to support his entertainment career. He shot for commercials that were shown on ‘Disney’ and ‘Nickelodeon’ in July 2017.

He then starred as ‘Alex’ in a 2018 episode of the TV series ‘Solve,’ titled ‘Death in Sex Ed.’ The same year, he appeared in an episode of the series ‘Piperazzi,’ titled ‘Santa Monica, Here We Go!’

He bagged his most prominent role, in the series ‘Chicken Girls,’ in 2018. He first appeared in the second season of the series, starring alongside Annie LeBlanc and Hayden Summerall, and continues to portray his character, ‘Robby,’ to date. He has appeared in more than 30 episodes of the series.

Matt was also part of a 2018 short film titled ‘Ghost.’ He also appeared as ‘Robby’ in the 2019 movie ‘Intern-in-Chief,’ which released in August that year.

He is all set to appear as ‘Jason’ in the series ‘Save Me’ and as ‘Hopper’ in the adventure movie ‘Patsy Lee & The Keepers of the 5 Kingdoms.’ Both are in the post-production stage.

While establishing his acting career, he also began experimenting with pop music and the app ‘TikTok’ (earlier ‘musical.ly’), where he posted his first official track, ‘I Know.’ The single was released in July 2017, by the label ‘Parimore Entertainment.’ His second single, ‘Airplane Mode,’ was released that year, too.

He performed ‘I Know’ live for the first time at ‘Vid-Con 2017’ in Anaheim, California. ‘Do You Say My Name,’ released in 2018, was another of his hit tracks. Apart from ‘Parimore,’ Matt has also released music through the label ‘Theory Y.’ His music is available on ‘iTunes’ and ‘Spotify.’

His ‘TikTok’ account, “itsmattsato,” has gained more than 47 thousand followers and over 143 thousand likes.

He launched a self-titled ‘YouTube’ channel on May 12, 2017. It has, over the years, gained over 5 million views and more than 88 thousand subscribers. He has very few videos there, but his content mostly covers travel vlogs and his songs.

Matt was first spotted by talent scouter Nancy Bernal, who now works as his manager. Matt is represented by the agency ‘Luber Roklin Entertainment.’ He was earlier represented by Milton Parea of ‘Amsel, Eisenstadt, Frazier & Hinojosa Inc.’ (AEFH) and Mara Santino of ‘Luber Roklin.’

He has endorsed brands such as ‘Acura’ through his social-media posts. His official site is www.mattsatoofficial.com.

Not much is known about his family. However, it is known that his mother’s name is Lara Lee.

He has four siblings: his older brothers, Gavin, Brandon, and Mark, and his older sister, Ashley Sato.

He is believed to have started dating actor Tori Keeth, famous for appearing in the ‘TLC’ series ‘Escaping the Prophet,’ in 2019.

Earlier, he was rumored to be in a relationship with his ‘Chicken Girls’ co-star Annie Leblanc. The rumors began when he posted a photo of LeBlanc and himself on his ‘Instagram’ account in February 2017. However, the rumors were not confirmed to be true.

He was later linked with singer and actor Victoria Justice, when the two appeared together at the movie premiere of the 2017 comedy ‘The Outcasts.’ However, this rumor, too, turned out to be false.

Matt is fond of military-style clothing. He is known for his trademark unkempt hair and expressive eyes. His favorite actor is Tom Hanks.

Matt is fond of sports and apart from swimming, he loves horse riding and surfing. He also likes playing basketball and volleyball.

He is fond of pets and has a cat. He also loves dogs and likes visiting pet stores. Matt likes playing the guitar, too. He can also play the piano. He likes eating sweets and loves gorging on chicken.