Catherine Paiz is a French-Canadian model, actress, and social media sensation. Starting her career with modelling, she worked with the likes of Azzelia Swimwear and Victoria Secret, and eventually forayed into acting and featured in films such as ‘Lilin’s Brood.’ She also served as VIP manager of Arkadia Miami. She, along with her boyfriend, Austin McBroom, has also earned immense fame through their family YouTube channel, ‘The ACE Family.’ It features vlogs, challenges, pranks, and fun family time videos that include the two and their two adorable daughters.

Catherine Paiz was born Dolores Catherine Johnston Paiz on August 24, 1990, in Montreal, Canada. She has three younger siblings – two brothers and one sister – of whom her younger brother, Ryan Johnston, is an Instagram star, too. Raised as a Roman Catholic, Catherine spent much of her childhood in Montreal. She later relocated to the US and grew up under her mother’s guidance in Tampa, Florida, where the latter owned a hair salon. Every day, her mother drove her for an hour to school where she participated in various sports, such as volleyball, soccer, and hockey. She also attended swimming classes. Following her school graduation, Catherine attended ‘St. Louis University.’ She can speak French, English, and Spanish. Her nickname is Nini. 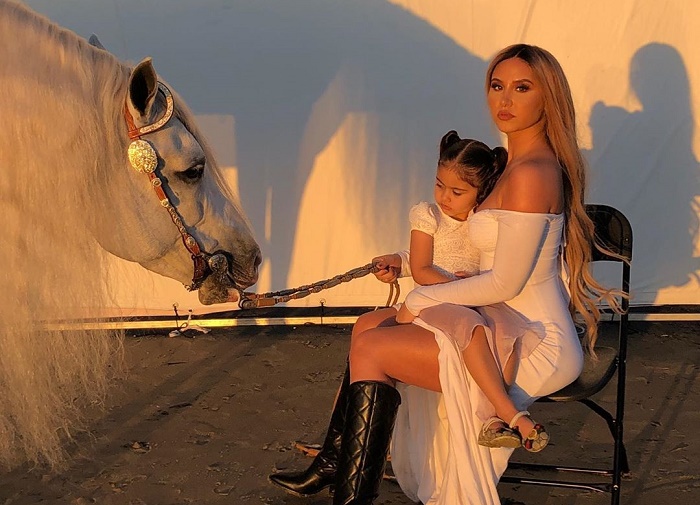 Catherine shifted to Los Angeles, California, to make it big in modelling and acting. She began her modelling career with ‘Victoria’s Secret’ at just sixteen years of age. Thereafter she worked in an ice-cream parlour for a short while. She continued with her modelling pursuits and appeared for the US based brand ‘Azzelia Swimwear.’ With time Catherine made a niche for herself in the field. She also worked as a VIP manager at ‘Arkadia Miami.’

While pursuing modelling, Catherine stepped into the world of acting. She has worked in both small-screen and big-screen productions. She worked as a television host as well. She featured in the 2016 thriller film ‘Lilin’s Blood,’ which was directed by Artii Smith and P.W. Simon, and starred Martin Sensmeier, Melinda Milton, and Maxine Goynes. The same year, she appeared in a small role in the romantic family drama film ‘Monday Night at Seven,’ which was written and directed by Marty Sader (he also starred in the film). She was also seen playing a small role in the André Gordon directed and March 2017 released thriller film ‘You Can’t Have It.’ The film starred Matthew Pohlkamp, Armand Assante, and Joanna Krupa.

While establishing herself in modelling, Catherine also took to social media and started posting her pictures on her Instagram account. The sizzling hot pictures of the hazel-eyed beauty gradually began getting attention. She also posted pictures along with her boyfriend, Austin McBroom, who is also an Instagram star. With time her pictures and posts began attracting considerable popularity and raised her fame as an Instagram star. 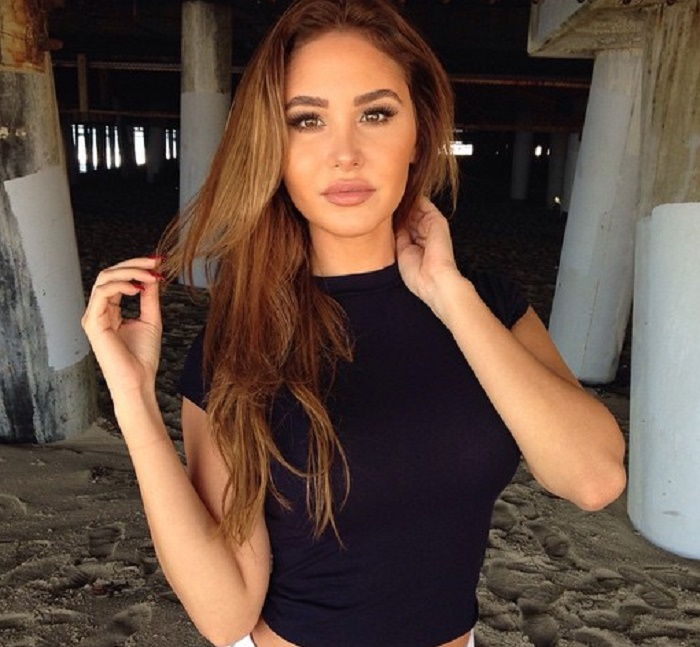 As a result of their rising popularity on Instagram, Catherine and Austin launched their family YouTube channel, ‘The ACE Family,’ on January 10, 2016. The term ‘ACE’ in the channel’s name was derived by combining initials of the two and that of their un-born daughter, Ella. The couple posts vlogs, pranks, fun family times, challenges, and crazy experiences on their channel, which has only bolstered their social media presence. Their elder daughter, Elle, frequently appears their videos, most of which have earned millions of views. Two of the most popular videos of their channel are ‘THE BEST PROPOSAL OF ALL TIME!!! (JUMPING OUT OF A PLANE)’ and ‘THE OFFICIAL ACE FAMILY LABOR AND DELIVERY!!!’. The two have also posted official music videos on the channel, including ‘THE ACE FAMILY – YOU’RE MY ACE’ and ‘GIDDY UP,’ which became extremely popular among viewers.

In November 2013, Catherine revealed through an Instagram post that she had undergone a breast augmentation procedure in 2010. A speculation also does the rounds that she got a plastic surgery on her nose, but she has not revealed anything about her nose job.

Catherine and Austin McBroom, a former basketball player from the ‘National Collegiate Athletic Association’ (NCAA), both of whom attended ‘St. Louis University,’ met each other during a 2015 party. They eventually began seeing each other. It was only after Catherine’s unexpected pregnancy that the two decided to start a family formally. On May 28, 2016, they welcomed their first child, a daughter, Elle Lively McBroom. In August the following year the couple got engaged. The family announced about Catherine’s second pregnancy through the video ‘MOMMY AND DAUGHTER SURPRISE DADDY WITH PREGNANCY ANNOUNCEMENT!!! (SPEECHLESS),’ posted on February 6, 2018. Kylie Jenner, a close friend of the couple did a ‘gender reveal’ video with them for their second child. Catherine also took to Instagram to disclose the news of her second pregnancy on February 7, 2018. The couple’s second daughter, Alaïa Marie McBroom, was born in October 2018.

According to some sources, Catherine and Austin parted ways after Catherine came to know that the latter cheated on her by sleeping with one of her friends while he was on a vacation. Sources also mention that she has shared the message through social media where she said that Austin was with some of her friends in Miami and slept with one of them and also made the latter sign an NDA.