Honey Boo Boo is the nickname, American child beauty pageant contestant and reality TV star, Alana Thompson, is popularly known by. She gained fame for her appearance on TLC’s ‘Toddlers & Tiaras’, which led to her own reality series ‘Here Comes Honey Boo Boo’. She has also appeared on her mother’s weight loss documentary ‘Mama June: From Not to Hot’ and was a contestant on ‘Dancing With the Stars: Juniors’, apart from guest appearances on shows such as ‘Good Morning America’ and ‘The Doctors’. She and her mother have been involved in several controversies in the past few years. She is currently active on Instagram.

Honey Boo Boo is the youngest of four sisters

Honey Boo Boo is the fourth child of her mother, June ‘Mama June’ Shannon, and her only daughter with her on- time partner Mike ‘Sugar Bear’ Thompson. She has three older sisters from her mother’s previous relationships. Her oldest sister, Anna ‘Chickadee’ Cardwell, the daughter of June and David Dunn, was previously married to Michael Cardwell and has two daughters named Kaitlyn and Kylee. Her two other sisters, Jessica ‘Chubbs’ Shannon and Lauryn ‘Pumpkin’ Shannon are the daughters of June and Michael Anthony Ford, a convicted sex offender, even though they grew up knowing Mark McDaniel as their father, who was an ex-boyfriend of their mother and was convicted for sexually abusing their older sister Anna. Her mother and her two sisters, Anna and Lauryn, became teen mothers. 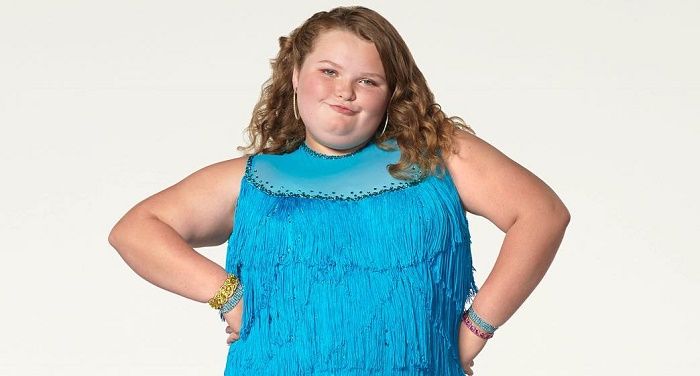 Honey Boo Boo began participating in child beauty pageants when she was very young and eventually was featured on the popular TLC television show ‘Toddlers & Tiaras’ in January 2012. She became very popular after appearing with her mother on the first episode of the fifth season of the series, which provided behind-the-scene look at the world of children’s beauty pageants. She immediately won the hearts of the viewers with her sassy attitude and made more appearances on the show later.

As shown on ‘Toddlers & Tiaras’, one of the things Honey Boo Boo was very fond of was the ‘go-go juice’ that her mother would give her before she entered a competition. Also on the show, it was revealed that the ‘go-go juice’ was actually a mix of Mountain Dew and Red Bull which, according to expert estimates, contained the same amount of caffeine as in two cups of coffee whereas children under 12 are advised not to consume caffeine at all. While many were concerned about Honey Boo Boo being given the high calorie drink by her mother, June simply responded saying that she could have given her much worse, like alcohol or Pixy Stix, also known as ‘pageant crack’.

Thanks to her popularity on ‘Toddlers & Tiaras’, Honey Boo Boo was given her own reality television show by TLC titled ‘Here Comes Honey Boo Boo’, which premiered on August 8, 2012 and was seen by 2.2 million viewers. The show introduced the other members of her family, including her three older sisters and her father Mike Thompson. The series, which revolved around their daily lives, ran successfully for four seasons before ending abruptly prior to airing the fifth season. The show was cancelled after her mother created a controversy by rekindling her relationship with her ex-boyfriend Mark McDaniel, who had sexually abused her oldest daughter Anna at the age of 8. A few episodes had already been shot when the series was cancelled. The incident also created a lasting rift between June and Anna.

Her reality series was heavily criticized and parodied

Despite the fact that her reality series ‘Here Comes Honey Boo Boo’ had attracted a large number of viewers, it also got negative reviews from many who criticized the show for potential child exploitation. While some described the series as a horror show, others lamented glorifying “a horde of lice-picking, lard-eating, nose-thumbing hooligans”. Even some of the other shows on television and on the internet began making fun of the series. The popular animated series ‘South Park’ parodied the reality show in its season 16 episode ‘Raising the Bar’. The sketch comedy series ‘MAD’ made a short titled ‘Here Comes Yogi Boo Boo’, while CollegeHumor uploaded a parody video called ‘Precious Plum’ on their YouTube channel. A look-alike of Honey Boo Boo was also used on the film ‘Scary Movie 5’.

Her nickname was the result of a misinterpretation

While Alana Thompson is widely known by her nickname ‘Honey Boo Boo’ and even had a reality show with the phrase in the title, she actually got the name because of a general misinterpretation of an incident during her appearance on ‘Toddlers & Tiaras’. The phrase was actually used by her to taunt another contestant at a beauty pageant, but the viewers mistakenly began calling her the ‘Honey Boo Boo Child’, which stuck to her later and became her nickname.

In September 2015, while at the top of her popularity, Honey Boo Boo released her debut single ‘Movin’ Up!’ The single also featured American actor, reality star and musician Adam Barta and her older sister Lauryn Shannon. Along with her sister and mother, she also appeared on the music video of the song, which has been posted on YouTube by her manager but has overwhelmingly negative ratings, possibly because of the controversies she has been through.

She appeared on her mother’s documentary TV series

Both Honey Boo Boo and her mother have struggled with obesity for a long time. They appeared on an episode of ‘The Doctors’ in 2015 when she was diagnosed clinically obese and her mother was advised to control her weight. Much later, after ‘Here Comes Honey Boo Boo’ was cancelled, her mother featured on her own weight loss documentary series on WEtv, ‘Mama June: From Not to Hot’, the first season of which aired in February 2017. She went through extreme diet and exercise regime and also underwent a gastric sleeve procedure, which resulted her in losing nearly 300 pounds. Alana regularly featured on her mother’s show that lasted for three seasons until her arrest.

Her mother and her partner were arrested for felony drug possession

While the first season of ‘Mama June: From Not to Hot’ primarily focused on her mother’s dramatic positive transformation, by the third season, she was seeing Eugene ‘Geno’ Doak, who has a criminal history, and allegedly became addicted to drugs. During one episode of the third season, the daughters pleaded with their mother to ditch drugs and Geno and come back to normal life, and convinced her to enroll in an inpatient program. However, she cancelled the program after 12 hours, leaving with her boyfriend Geno. June and her partner were eventually arrested on March 13, 2019, from an Alabama gas station for felony possession of drugs. Alana subsequently began living with her sister Lauryn, who later obtained her legal guardianship from their mother.

After her reality show ‘Here Comes Honey Boo Boo’ was cancelled, apart from her appearances on other television shows, she began to maintain her own Instagram account, on which she has 529k followers. In September 2019, during a live stream on Instagram, she was seen mimicking drug consumption by picking up a plastic knife and pretending to prepare and inhale cocaine. Her sister Lauryn was quick to stop her and take her offline, but apparently her mother’s behavior left a deep impression on the young girl. Later that month, she got ‘real’ with her Instagram followers, writing in a lengthy caption how proud she was for being able to lead a normal life after being through “hell and back” and urged her fans to be proud of their struggles.

Honey Boo Boo has a crush on her ‘Dancing With the Stars: Juniors’ partner Tristan Ianiero

In October 2018, Honey Boo Boo appeared on the first season of the children’s dance competition ‘Dancing with the Stars: Juniors’ on ABC. Her professional partner for the show was Tristan Ianiero, and the pair was eliminated 8th on October 28th. In March 2019, during an interview with ‘Us Weekly’, 15-year-old Alana stated that boys were “hitting her up” on social media. Her sister Lauryn, who had accompanied her to the interview, added that Honey Boo Boo had her eyes on her former dance partner Tristan.

Her father admitted to cheating on her mother

Her parents separated soon after her rise to fame and her father later married Jennifer Thompson (nee Lamb). He appeared in one episode of ‘Marriage Boot Camp: Reality Stars’ and revealed that he had cheated June with both men and women during their relationship. His current wife Jennifer, who is also obese, has stated that she considered surgery to lose weight but decided not to, fearing her husband might leave her as he prefers larger women. Jennifer had also submitted Mike’s DNA for Honey Boo Boo’s paternity test.